A warm thank you to all of our supporters! Our 2010 campaign raised $522,151.25 from 1,139 individual supporters and 22 companies. A huge thanks to our Board of Directors and all of our corporate sponsors, including 3taps, Tucows, Digital Garage, Ebay, Microsoft, LuLu, wikiHow, Hindawi, Squidoo, The Miraverse, and Aramex. More campaign numbers will be available soon on our blog.

Creative Commons enters 2011 with renewed energy, thanks to the holiday season and a new incoming CEO! As many of you know, we welcomed Cathy Casserly as incoming CEO of Creative Commons. As the Senior Partner at the Carnegie Foundation for the Advancement of Teaching and former Director of OER at the William and Flora Hewlett Foundation, Cathy brings with her extensive experience with foundations and open educational resources (OER). But Cathy has also been involved with CC from the beginning. Lawrence Lessig writes, 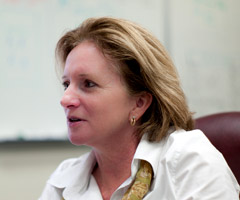 “One of the most important moments in the history of Creative Commons happened on the day the Supreme Court upheld (incorrectly, in my view, but let’s leave that alone) the Copyright Term Extension Act in Eldred v. Ashcroft. After reading the decision, I had my head in my hands, buried in sadness, when my assistant reminded me that I had a 10am meeting with two people from the Hewlett Foundation. This was exactly one month after we had launched Creative Commons.

Cathy and Mike had heard about the Supreme Court’s decision. They recognized I wouldn’t be in much of a mood to chat. So they launched right into the reason for the meeting: The Hewlett Foundation had decided to help launch Creative Commons with a grant of $1 million dollars.

I won’t say that after I heard that news, I forgot about the Supreme Court. But from that moment on, it was much more important to me to prove Hewlett’s faith right than to worry about what the Supreme Court had gotten wrong. And I was especially keen to get to know these two people who understood our mission long before most had even recognized the problem that CC was meant to solve.”

We welcome Cathy and thank Joi for his fruitful two years as CEO. We are equally excited that Joi will remain Chair of the CC Board, and look to both Cathy’s and Joi’s strong leadership to move CC forward in 2011.