[This email is part of a weekly series written by Lawrence Lessig and others about the history and future of Creative Commons. If you would like to be removed from this list, please click here:
http://creativecommons.org/about/lessigletter#unsubscribe
Alternatively, if you know others who might find these interesting, please recommend they sign up at
http://creativecommons.org/about/lessigletter ]

From last week’s episode:
Next week I’ll describe a second initiative that we’ll be launching over the next year. And while this second initiative will be important for Creative Commons, it will be critical to the ecology of creativity generally. Stay tuned.

The story continued:
Creative Commons didn’t invent the idea of free public licenses. Richard Stallman did, at least in the first broadly successful way. Nor did Creative Commons invent the first free public licenses for content. Before our work, there were many others who had followed Stallman’s lead, releasing free licenses tuned to creative work. The Art Libre license is perhaps the most famous. The BBC’s Creative Archive licenses are the most prominent recent examples, freeing access to important British culture, at least for British citizens. And finally, the Free Software Foundation’s GNU Free Documentation License is a copyleft license designed initially for software documentation, but used most prominently by the Wikipedia project.

These free licenses all share a common goal. With each, the aim is to give creators the opportunity to offer others important freedoms. The particular freedoms may be different. The Creative Archive licenses, for example, are not all copyleft. And the restrictions of the FDL make it inappropriate for much of the work covered by the Art Libre license. But these differences reflect the diversity that exists across creative communities. The important point is not the differences but instead the common aim.

Yet all of these free licenses, as well as the current versions of all Creative Commons licenses, share a common flaw. Like the world of computing in the 1970’s, or like the world of content that DRM will produce, these licenses wrap creative work in ways that makes that creativity incompatible.

Your plan is very simple: You’ll set the life described in the Wikipedia entry to film, supplement it with images that you find in Flickr, and add music that you’ve downloaded from Opsound.

As I described earlier, perhaps the most important feature of digital content is that from a technical perspective such a project is now trivial. Technology now gives creators — at a relatively tiny cost — the ability to take sounds and images from the culture around us and remix them to produce something new. A high school student using off the shelf technology will find no technical barriers to the remix I’ve just described. Of course, you’ve got to be good creatively. It’s not easy even with the best technology to make a film. But that challenge, one might well think, is the appropriate challenge for a creator. Get the technology out of the way, and let the difficult task be the task of creating.

Yet there’s another difficulty lurking in this story that many are just becoming aware of within the Free Culture Movement. You might be able — technically — to remix all this creativity. But can you remix it legally? Will the licenses that “free” content permit that free content to be remixed?

The astonishing (and for us lawyers, embarrassing) answer is no. Even if all the creative work you want to remix is licensed under a copyleft license, because those licenses are different licenses, you can’t take creative work from one, and remix it in another. Wikipedia, for example, is licensed under the FDL. It requires derivatives be licensed under the FDL only. And the same is true of the Creative Commons Attribution-ShareAlike license that governs Opsound content, as well as much of the creativity within Flickr. All of these licenses were written without regard to the fundamental value of every significant advance in the digital age — interoperability.

We’re going to fix this. Or at least, we’re going to try. One way would be for everyone to use just one particular Creative Commons license. But bullying the world into using a single license is neither consistent with our values nor sensible for the ecology of free culture. So instead, we are launching a project to facilitate interoperability among sufficiently compatible license types. And we will work hard to persuade others within the free license ecology to join us in this movement.

Here’s the basic idea we’re starting with (though recognize that there will be lots of discussion before we settle on any final plan). As you’ll see, it builds upon the strategy we’ve already adopted to assure compatibility across licenses in different jurisdictions: 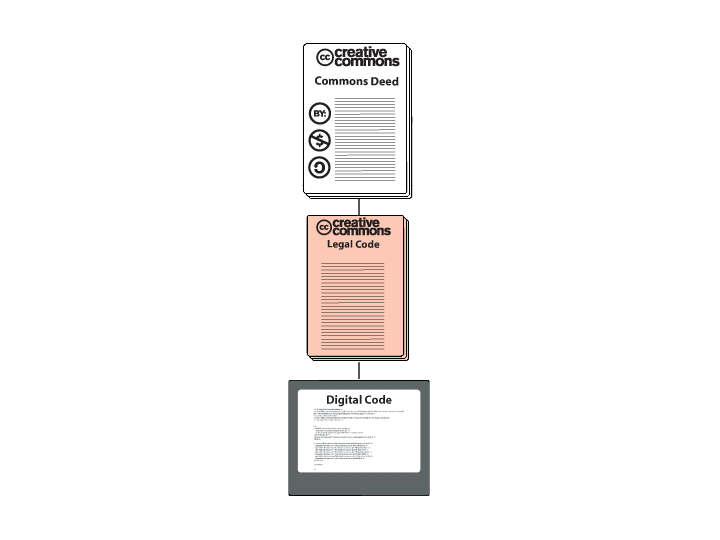 Early on, we started porting our licenses to other jurisdictions, so that people around the world can license their creativity under local law. In that process, our aim was to assure that creativity licensed in one country was compatible with creativity licensed in another. Thus we multiplied the licenses at the second layer of our architecture, creating something that looks like this: 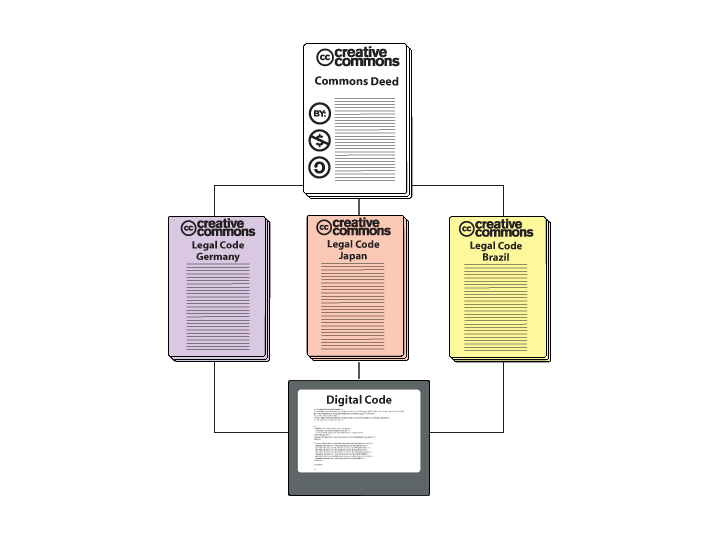 Today we announce the beginning of a project to explore expanding this interoperability beyond Creative Commons licenses. We’ve begun a process to build a board (what we’ll call the Creative Commons Legal Advisory Board, or ccLab for short) that will be composed of experts in licensing from around the world. This board will establish procedures by which similar free licenses, upon submission from the license curator, can be deemed “compatible.” And if a license is deemed compatible, adds CC metadata to express the freedoms associated with the content, and links to a Commons Deed, to explain the freedoms associated with the content, then we will certify the license as within the federation of free licenses that we’re trying to build. This world will then look something like this: 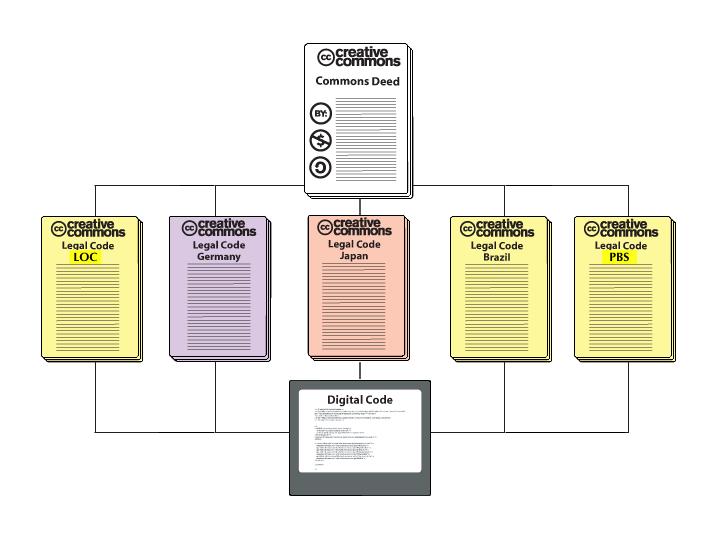 If we succeed in this project, then creative work will more easily be able to move from one license to another, as creativity is remixed. And this ability for creative work to move to compatible free licenses will provide a market signal about which licenses are deemed more stable, or reliable, by the free licensing community. Free culture will no longer be ghettoized within a particular free license. It will instead be able to move among all relevantly compatible licenses. And the world of “autistic freedom” that governs much of the free software world will be avoided in the free culture world.

This project won’t, of course, make incompatible licenses compatible. For example, work licensed under an Attribution-NoDerivatives license can’t be mixed with work licensed under an Attribution-ShareAlike license. That incompatibility, however, is intended by the creator. And while I agree with many that we should work to reduce this sort of incompatibility as well, I believe it is much more important to eliminate unintended incompatibility first. The creators who are joining the Free Culture Movement by releasing their creative work under free licenses do so because of the values those licenses express. They don’t do so because of the particular flair of legal prose that one free license might have over another. We must find a way to push the egos of the lawyers off of center stage, so that the values of the creators can finally be realized.

This is not an easy project. It will require lots of support. Most importantly, it will require all of us within the Free Culture Movement to put aside our own parochial interests, and work to cooperate for a sensible end. As Richard Stallman famously said:

“If we don’t want to live in a jungle, we must change our attitudes. We must start sending the message that a good citizen is one who cooperates when appropriate…”

Stallman is absolutely correct. The creators who have chosen the values of free culture don’t want a world where their creativity can’t be used consistent with their values. We who are building the infrastructure of free culture have a responsibility to respect their values.

Next week, I’ll turn to some of the critics of Creative Commons. But this week, indeed, right now, we still need your support.

We’re one month to the end of this drive, and have a long way to go. Check out the Red Hat dollar for dollar challenge.

9 thoughts on “CC in Review: Lawrence Lessig on Compatibility”