Creative Commons owes much of its success to the hundreds of dedicated volunteers who have helped port, translate, and propagate CC licenses in over 50 jurisdictions worldwide. CC Korea, under the leadership of Project Lead Jay Yoon, has achieved some incredible things since its inception, and continues to be a beacon of participatory culture in Asia and across the globe. We are honored to have Jay Yoon, who has already given so much of his time and talent to CC, show his support in the third letter of the Commoner Letter series for this year’s fundraising campaign. 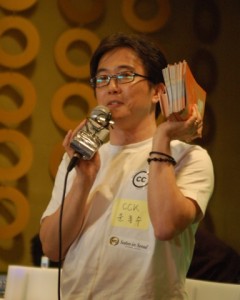 I am Jay Yoon and the first Creative Commons volunteer in Korea. Officially, I am the project lead of CC Korea, but I’d more like to introduce myself as the first CC Korea volunteer than its lead as I am writing this letter, hoping you join with me in volunteering to help Creative Commons. Why? Because the powerful engine of sharing and open culture has already taken Creative Commons far beyond what I had initially expected. None of this would have been possible if not for the help of so many “Commoners.”

At the very beginning, I didn’t expect to see so many people come together to get Creative Commons values rooted in Korea in such a short time period. Over the past four years since the introduction to Korea, the suite of CC licenses has been growing from a mere foreign concept to become one of the most-sought public license tools among Korean users. And Creative Commons Korea in itself, once a small project led by selective members in the legal circle, has transformed into an open community for anyone sharing CC values and vision. To my great joy, I can say that every moment I’ve had with CC is a small miracle.

On top of that, this year will leave a meaningful footprint in the history of Creative Commons Korea, since it has registered as an independent legal entity, called Creative Commons Korea Association. As a not-for-profit incorporated association, it is expected to more actively engage in lowering barriers to collaboration and building infrastructure for the future of creativity.

Despite its belated start, Korean users have shown dynamic growth in adopting CC licenses. In an aim to create more CC-licensed content-friendly environments, CC Korea is leading national projects with the Korean government. One of them is a CC repository system, which would act as a hub for CC-licensed content archiving and searching for domestic users as well as Commoners around the world. CC Korea hopes to achieve our own technological understandings and customized experiences into localities. The repository system will consist of several sections, such as a search interface provided by a few big portal sites that have already introduced CC licenses into their blog or community sections, CC content metadata database provided by public sectors and OSPs, and CC content information collected by users. Taking this chance to promote open content, the Korean government is now looking for a way to open its content to the public under a CC license and is working on a comprehensive roadmap for CC services and technical projects.

But the most amazing thing is that the driving force behind all the advances so far has come from each and every voluntary contributor. Various sized projects in art, academy and education are ongoing thanks to those contributors. From an office worker to a teenage student, from the project lead to a brochure sponsor company, at the heart of CC Korea is those individuals’ great passion. This is what I really want to share with you.

From my daily life with Creative Commons, not only do I feel myself grow as I take part in laying a layer for a more open society, but I also experience how the power of “we” can really do something. That’s why I’m so thankful I could be a part of Creative Commons.

I hope you will join me in supporting Creative Commons.

One thought on “Commoner Letter #3: Jay Yoon of CC Korea”