Stephen Friend is the President, CEO, and co-founder of Sage Bionetworks. He was previously a Senior Vice President at Merck & Co., Inc. where he led Merck’s Basic Cancer Research efforts. Stephen is a committed advocate of Science Commons, the wing of Creative Commons dedicated to making the Web work for science. Stephen’s innovative work with Sage creating an open access bionetwork is inspiring and commendable, and we’re honored to have him write the sixth letter in the Commoner Letter series of this year’s fundraising campaign. We hope you will be inspired by his story of scientists coming together to grow a commons that will help speed medical innovation and discovery and will join him in supporting Creative Commons today. 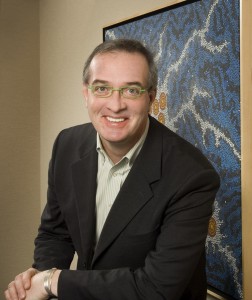 I’m writing today as the President and co-founder of Sage Bionetworks, a new non-profit medical research organization. At Sage, we’re working to build a pre-competitive space for scientists, research foundations, and research institutions to collaboratively discover the way diseases really work in the human body.

I started my career as a doctor, treating kids with cancer. My experience there led me into a deep study of genetics, and into the use of software and computation to investigate diseases by filtering genome data. For a long time, the field has been dominated by a reductionist approach to disease, and by the idea that success would come to individual groups who gathered and mined their own self generated enclosed data and content.

With my scientific partner Eric Schadt, we built software and databases at Merck that assemble “globally coherent” data (like clinical outcomes, genetic variation, intermediate traits, drug reactions) into unified predictive models. We have proven that it works.

But after spending seven years building massive models of human disease it becomes clear to me that no single company, not even one as big as Merck, could possibly gather and integrate enough information to make the decisions we need to make about when and how to treat something as complicated as cancer or Alzheimer’s, or for that matter, cardiovascular disease.

It was going to take a collaborative effort. I saw inspiration in Wikipedia, in GNU/Linux, in systems that were capable of scaling far beyond the capacity of a single institution.

So I decided to leave Merck, and build the seed of an open, pre-competitive space in biology using what we’d done inside the company. Merck gave us more than $150,000,000 worth of work, software and data and supercomputers, and we launched this fall with funding from disease foundations and other donors.

Our goal is ambitious. We want to take biology from a place where enclosure and privacy are the norm, where biologists see themselves as lone hunter-gatherers working to get papers written, to one where the knowledge is created specifically to fit into an open model where it can be openly queried and transformed. To learn more, please look at our website at www.sagebase.org. We feel very fortunate to be working with the Science Commons project at Creative Commons on the construction of a scalable, open commons for biological research.

What Creative Commons is doing to build scalable communities who share – whether it’s creative works like photographs, stem cells, patents, or massive biological data like we’re doing at Sage – is essential infrastructure for the Web. Our goals at Sage won’t be realized if we can’t build a commons for us, for our users, for our patients.

I strongly urge you to join the fall campaign to support Creative Commons with a donation, and I also urge you to get out there and start licensing!

One thought on “Commoner Letter #6: Stephen Friend of Sage Bionetworks”