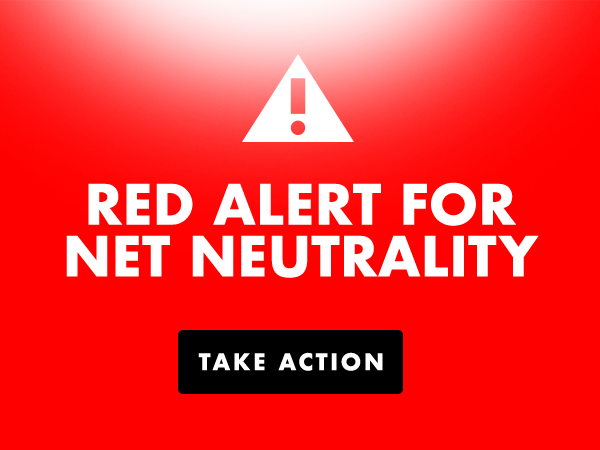 Today Creative Commons is joining dozens of organisations in the Red Alert for Net Neutrality. The action calls on individuals to contact Congress with phone calls, emails, and tweets in support of the upcoming Senate vote on a Congressional Review Act resolution to block the FCC’s repeal of net neutrality.

The open internet protections must be restored.  Contact Congress now!

The Congressional Review Act (CRA) is a mechanism that gives Congress the power to reverse federal regulation by passing a resolution of disapproval. The CRA action must be taken within 60 legislative days of enactment of the regulation, and must meet a simple majority. Today Senator Ed Markey (D-MA) submitted a petition to force action on the measure, and a Senate vote could be taken as early as next week.

There are already 50 Senators lined up in favor of blocking the FCC’s repeal of net neutrality, but 51 votes are needed for the resolution to pass. Winning the Senate vote on the CRA will be essential for building momentum for the fight in the House. And advocates want to put net neutrality front and center with Congress and make them weigh in on this critical issue, especially considering the upcoming 2018 midterm elections. According to a December 2017 poll, 83% of respondents supported keeping the net neutrality rules, including 75% of Republicans, 89% of Democrats, and 86% of independents. Thousands of businesses already signed a letter to support the CRA to save net neutrality.

There are over 1.4 billion CC-licensed works online, shared freely with anyone with access to the internet. We advocate for a strong digital commons of creativity and knowledge, but open content is only one piece of the puzzle. The open internet is central to so many aspects of everyday life—from accessing education and news, communicating with friends and family, enjoying diverse entertainment like movies and music, and collaborating on global projects like Wikipedia.

Several lawsuits are making their way through the courts, and states have been introducing their own bills to protect net neutrality. But now is the time to reach out to your Senators and tell them to support the upcoming CRA resolution to block the FCC’s repeal of net neutrality.

It’s important to act now to save net neutrality. The Senate vote could happen soon.

The FCC’s repeal of net neutrality is opposite of what the public wants. Instead of dismantling the rules, we should be protecting and extending reasonable consumer protections that kickstart creativity, fuel innovation, and improve access to information online.