The DigiBarn is a computer museum located in a 90-year-old barn in California’s Santa Cruz Mountains. It is also an online repository of Creative Commons-licensed photos, video, audio, and technical documentation that tell the history of personal computing. The DigiBarn’s collections include small and big computers, game systems, software, and schwag.

We recently spoke with the DigiBarn’s curator, Bruce Damer about the museum and its use of CC licensing.

Creative Commons: What is the DigiBarn project? How did it start?

Bruce Damer: The DigiBarn is a large physical collection of computing artifacts that is housed in a barn in the Santa Cruz Mountains above Silicon Valley in Northern California. The DigiBarn is also a sprawling cyber-collection at digibarn.com, which represents both physical artifacts and thousands of community contributions that tell the story of the invention of personal computing, the graphical user interface, and the digital lifestyle. We go beyond just giving the specs for a given computer to weaving together the stories of those who built the industry. We also showcase all the ephemera — from company t-shirts to software to internal prototypes.

I started collecting this history while working with Xerox and Xerox PARC in the 1980s. I formally commissioned the physical museum in 2001 with the help of my friend and neighbor Allan Lundell, a well known video chronicler of Valley history and the first west coast editor of Byte magazine. Behind the project are literally thousands of contributors and hundreds of volunteers who have emptied their garages, told us their stories, and done heavy lifting for the physical and online exhibits.

CC: What are your goals for the DigiBarn?

BD: To capture the story of the birth of personal computing and the origins of the digital lifestyle we are all now living. The artifacts and the story are rapidly being lost and every week someone passes away who had something to contribute to the telling of that story. In a decade or two most of the people who brought us the modern computing world will be gone. In the meantime we are trying to capture oral histories from these people, both the famous and the not-so-famous.

CC: In what ways does the DigiBarn use Creative Commons licensing?

BD: A key goal of the project was to collect and deliver our shared computing heritage to the public for noncommercial use, hence our choice of the Creative Commons framework. In fact, we were very early adopters, supporting the beta testing phase of CC back in 2002, and the DigiBarn site was featured content at the CC launch.

We provide noncommercial share-alike (with attribution) use of hundreds of thousands of photos, written stories, tech specs, scanned documents, audio interviews and video shorts about the history of computing from the late 1940s to today. From artists using our vintage computer photos to produce cool video mixes to academics writing papers and books, thousands of CC-licensed DigiBarn digital objects have found their way into the culture.

CC: How has the DigiBarn grown over the years?

BD: The DigiBarn is well on its way to having a complete collection of every model of significant personal computer (along with all associated materials) from 1975 to the late 80s. We stop collecting artifacts after about 1990, as by that date innovation and diversity in hardware and software was slowing and most computers were pretty much commodity items produced by a few manufacturers. We have also focused on early workstations including the Xerox Alto and Star, which were the first networked machines with graphical interfaces and mice. The only large systems we have are two Cray supercomputers (a Cray 1 and Cray Q2 prototype). These are impressive machines and true things of beauty. Since the web site launched in 1998, the cyber-collection has swelled to over a half million objects. 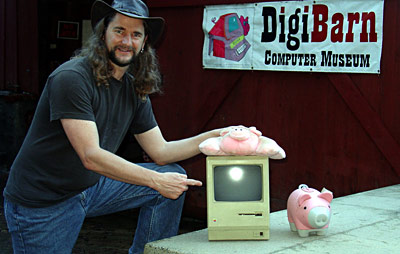 CC: You also curate a collection of key technical documentation. Can you talk a bit about your experience with this?

BD: Some of our key technical documentation, including video and audio interviews with key innovators, has begun to upset the apple cart in the patent domain. Our November 2004 30th birthday event for “Maze War,” the first-ever first-person shooter, uncovered so much prior art that Sony contacted us about several patent challenges on multi-player gaming. It turns out that by recovering the history of “Maze War,” we had knocked the wind out of several patent claims, which are now headed to settlement instead of to court. In a sense, each bit of digital archeology we dig up and publish openly under CC could roll back the invention envelope, protecting basic innovations in common use from being restricted through inappropriate granting of new patents.

There is another case regarding several loads of original documentation that contained some of Apple Computer’s key early business plans, prototypes and technical design documents. Some of this material had recently been ordered discarded by Apple management, yet these documents were key to understanding the history of Apple and where early innovations came from. It could also have been argued that these records Apple was abandoning were in fact part of a common cultural heritage. The DigiBarn accepted the donations with the full understanding by the donors that they would be made available to the world under CC license and there was no objection. You can see several of these contributions including the Woz Wonderbook and the Preliminary Macintosh Business Plan – 12 July 1981 on our site. More of these fascinating documents will be posted soon.

CC: How can people help the DigiBarn project?

BD: The DigiBarn is an all-volunteer effort with significant personal outlays of funds and time. We are hoping to find financial support to cover at least some of our volunteers’ time and for basic infrastructural improvements to the barn building (we have a big winter moisture problem to solve on the lower floor). We are therefore seeking donors of both funds and other forms of support to keep this effort going. We may establish a foundation for urgent oral history capture if such support can be found. If anyone out there is interested in helping out, please contact us.

We would like to thank Professor Lessig and the Creative Commons team for giving us a legal framework that has made the DigiBarn project possible. We are always encouraging other museums and collectors to adopt CC licensing as we feel it is an important vehicle that makes it possible to place historical digital archives into a container of commonly shared cultural heritage.