Day one of our two week/$50,000 Creative Commons International affiliate iSummit scholarship campaign exceeded expectations, but yesterday was a big letdown. We’ve raised $6,618 in two days. At this rate we will not be able to end the campaign early and will end up $3,674 short.

As promised, we’re going to profile Creative Commons International affiliates each day of the campaign. (Yesterday we cheated with a group photo, perhaps the poor results were deserved.) These are the volunteers your contributions fund scholarships for. After reading a profile or two, we think you’ll understand why giving now is the most leveraged way you can help grow the commons.

We’ll start with CC Hungary. I asked Bodó Balázs, one of the project leads, to provide some background and and update on what CC Hungary is up to now.

CC Hungary has become central to discussions about copyright in Hungary. Bodó and fellow project leads István Szakadát and Attila Kelényi have given dozens of invited talks about copyright throughout the country in the last two years, reaching audiences in education, arts, business and government. The CC Hungary mailing list has attracted discussants from across the spectrum, including advocates, artists, lawyers, and collecting society representatives. This forum has become a key place for Hungarians to trade views on copyright and digital media issues.

Recently CC Hungary gave its most exciting presentation yet. Vint Cerf, one of the many ‘fathers’ of the Internet, chief evangelist at Google, held a public lecture in Hungary on April 2. Creative Commons Hungary was invited to present the CC licences before the talk to the thousands of people who showed up to the talk.

A highly promising upcoming development is involvement with MediaWave, an international independent film and music festival in Hungary since 1991. Creative Commons Hungary was invited to assist in releasing the films in the MediaWave Archives under CC licences, and we will have a week long presence at the festival helping filmmakers, musicians to learn about CC and how CC licences can help them gain access to global audiences.

Now for a bit of background.

(First we interrupt for a very important pledge break.)

Note the byline on the Creative Commons Hungary website:

Bodó says this motto appears in many Hungarian schoolrooms. Its meaning, roughly:

Do, create, enrich, and the country will arise.

This is adapted from the last line of a poem called HUSZT by Ferenc Kölcsey:

Bodó explains that the CC Hungary motto is actually a remix of Kölcsey’s lines transformed to have a definitive subject instead of an indefinite one.

The poem comes from the early 1800s, a time of intense nationalism and modernization in the history of Hungary. Perhaps this is stretching a bit, but it seems that Creative Commons, particularly its international component, is a manifestation of analogous trends in the 2000s: globalization and digital networks. These trends have made participation in “do, create, enrich” accessible to the masses and without respect to country — humanity will arise.

Playing a key role in ensuring this dream is fulfilled — Creative Commons legal and technical tools and members of the community around Creative Commons, our international affiliate volunteers in particular. 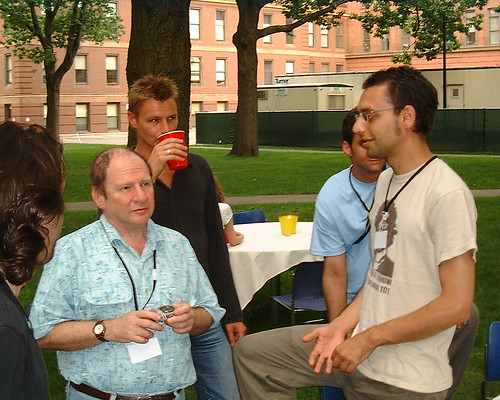