Over the holidays, we caught up with acclaimed writer (and podcaster) James Patrick Kelly and asked him some questions regarding the interesting and unique ways he has embraced CC licenses for his work. Read on to find out what positives Kelly has seen in using CC as well as which CC evangelist (hint: he also is known for writing science fiction) tipped him off to the whole concept in the first place. 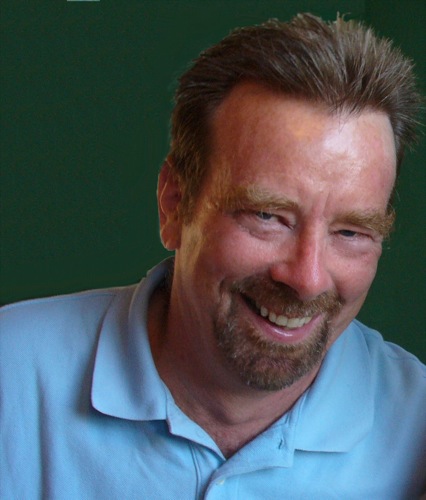 What is your background? Can you catch up our readers on the various projects you are involved in, from your writing to your podcast?

I am primarily known as a science fiction writer but I write in many genres, including mainstream or literary fiction, slipstream, fantasy and mystery. I’ve written five novels, about eighty short stories as well as poems, plays, essays and even a planetarium show. I’ve had some gratifying recognition for my work: two Hugos, a Nebula and a Locus Award. I’ve been churning out a column about science fiction and the internet at Asimov’s Science Fiction Magazine for more than ten years now. Back in 2004 I had a chance to be there pretty near the birth of podcasting. I was being interviewed by Dave Slusher and he tried to explain what it was and why it was so cool. But I was too dense to wrap my mind around podcasting just then, so it wasn’t until the fall of 2005 that I started Free Reads, which is my CC podcast. That led to James Patrick Kelly’s StoryPod on Audible.com, which is a for-pay podcast. But enough about me — if for some reason you lust for more Jim Kelly propaganda, check out my website jimkelly.net.

How have you been using CC licenses? Which CC licenses are you using and why?

I went to Clarion, a science fiction writers workshop, with Bruce Sterling back when we were both knee high to an adverb. Bruce and I have stayed in contact over the years and when he started giving his book, THE HACKER CRACKDOWN, away in the mid ’90’s, I was paying close attention. At that time I had a plain vanilla hand-crafted website and I began to post stories that had already come and gone in various science fiction magazines for people to read for free. This was way before CC, so I just posted the following at the gateway to my archive:

“Please don’t charge anyone for anything you find here without my expressed permission. Many of these pieces are copyrighted; I have not put them into the public domain. If you paid for any of them and they weren’t in a book or a magazine, I’d like to know. The person who sold them to you may have cheated both of us. I’d appreciate it if you’d keep anything you take from here in as close to its original format as you can. Don’t make changes — even if they are improvements — to my writing. And don’t plagiarize this stuff. It would be bad for your literary karma.”

It’s pretty amazing how close that is to the CC license 3.0, which is what I currently use!

Sixteen years after I went to Clarion as a student, I went back to teach in the program and have been doing it regularly ever since. The second time I taught I had the tremendous good fortune to have Cory Doctorow as a student. He’s been teaching me ever since and he was the one who turned me on to CC. It took me all of a nanosecond to realize that this was the best thing since the invention of the backspace key.

I teach popular fiction at the Stonecoast Creative Writing MFA program at the University of Southern Maine and one of the things I continually try to impress on my students (and fellow professionals) is that real writing needs readers. Consider the old philosopher’s chestnut: If a tree falls in the forest and there’s nobody to hear it, does it make a noise? Now tweak it to writing: If a story gets published in a magazine and two years later nobody can put their hands on the magazine, is the story still published? I would argue that it is not. So get it reprinted, yes? No. The problem is that traditional publishing isn’t be all that interested in yesterday’s stories. So, I tell my students, if you want your published stories to become slowly unpublished, go ahead and leave them in the dark of your desk drawer. Me, I’m going to use the CC license and get my stuff under the light of reader’s eyes. And … um … in their ears.

So far on my Free Reads podcast I’ve posted two novels, LOOK INTO THE SUN and BURN, in their entirety, as well as a handful of stories and a number of my columns “On The Net” from Asimov’s.

Can you talk about any interesting instances of reuse that have arisen from your choice of CC licensing? What benefits have you seen from using CC licenses?

Making best use of the CC license has led to two of the highlights of my career. In 2005 I published a novella called BURN with Tachyon Publications, a small press that gave me a small press print run of about three thousand. I was able to convince my editor to let me podcast the book, a chapter a week for sixteen weeks, beginning right around the pub date. Many, many, many more thousands listened to the CC licensed BURN than read it. I was astonished when it was a finalist for the Hugo and won the Nebula. It’s funny, but on the announcement from the Science Fiction Writers of America for the award, it was listed as a podcast rather than a book. Some have claimed it was the first podcast to win a Nebula, and I suppose that’s so. It certainly is the first CC licensed work to win a Neb. Would my little novel have gotten this kind of recognition had I not given it away for free? I don’t think so.

About a year into Free Reads I got an email out of the blue from Audible.com, the largest online seller of audiobooks. They said that they had been tracking Free Reads and were interested in working with me on a for-pay podcast project. This gave me a huge kick, because I was one of the earliest adopters of Audible. I love listening to audiobooks when I jog and garden and drive and potter around the house. We eventually closed a deal for me to record fifty-two stories for them for what came to be called StoryPod. Some of the stories they were interested in were already posted on Free Reads and part of our negotiations centered around how we could keep them available for free and at the same sell them on Audible. The folks at Audible proved to be flexible on this point; I think they recognized that satisfied listeners of Free Reads would be tempted to sample StoryPod, so all the stories stayed up.

What is next on your radar?

A friend and I recently redesigned my website to make downloading my CC licensed writing even easier. Now you can click an icon to print it or to email to yourself or a friend. I’m intending to post more stuff up there soon. Meanwhile, I have just signed up with Daily Lit, which is a service that will email you novels in thousand word chunks. They have a mix of free CC licensed and for pay fiction. They now have BURN. And I have a new short story collection coming out from Golden Gryphon Press in July called THE WRECK OF THE GODSPEED. Many of the stories that will appear in it are already posted on my site under the CC license.