vosotros is an LA-based record label that, over the past year, has been exploring unique and new ways of promoting music in the digital age. Ranging from their regularly updated podcast to their monthly residency in downtown Los Angeles, vosotros has acted as somewhat of a musical petri dish, experimenting with a variety of different ideas in getting the music they love to people who want it. We recently caught up with John Gillilan, Vosotros’ co-founder, and asked him a few questions in anticipation of their 1-year anniversary this Thursday:

What’s vosotros all about? What’s its history? How did it come about? Who’s involved?

vosotros is a new music initiative and label founded by Chicago natives John Gillilan and Gabe Noel. Our latest project, The Lazy Susan, will be released this February. We first met in Professora White’s 7th grade Spanish class, which is where we got our name. Vosotros is a Spanish verb conjugation roughly meaning “you-all.” But since it is only used in Spain, it was always ignored. Vosotros is music for you-all.

The Lazy Susan was born in February 2007, when we assembled a band to record one song and launch our year-long residency in downtown Los Angeles. Each month during the next year, we assembled a new band to record another song and play another month of the residency. Twelve months later, vosotros presents: the lazy susan – an album featuring thirty-two musicians on twelve songs written by bassist Gabe Noel.

February 28 marks the one-year anniversary of our residency at LAND (details here) – and the release of our third album as a label. You can listen to the lazy susan at last.fm and iMeem. Also, be sure to check out this promo video crafted by our friend Dave McCary using only public domain footage.

To date, we have released all of our work under a Creative Commons Music Sharing License, meaning that listeners are free to copy, transmit, and share our music for non-commercial purposes. This license was most appealing to us as a label because it offers the same rights as the “Attribution-Noncommercial-No Derivative Works 3.0” option – but in a way that is digestible for the casual music fan. In this critical growth period for Creative Commons, we believe it is important to present these concepts as simply and directly as possible to our listeners.

What’s next for Vosotros?

Lots! We’ve mapped out most of our release schedule through the end of 2008 and we have studio time booked starting the day after the lazy susan release show for our next project! And now that we have a few albums under our belts, we’re eager to start releasing music by some of our friends. Also expect some live performances from Quiet Orchestra. Stay tuned…. 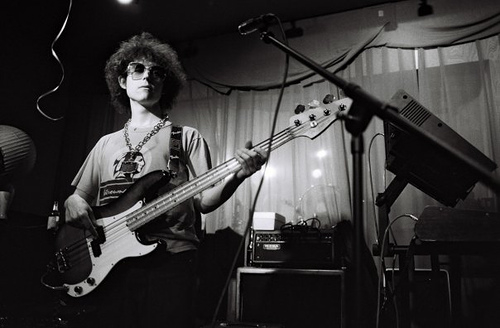