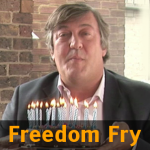 25 years ago Richard Stallman started the GNU (“Gnu’s Not Unix”) project to create a computer operating system like Unix (then ascendant in computer labs like the one Stallman worked in), but with source code free for programmers to run, study, share, and improve.

Free software from the GNU project now powers in the range of billions of computers, from microcontrollers and mobile phones to the Googleplex. Even software at the core of notoriously proprietary Apple’s OS X comes directly from the GNU project. Often, software from the GNU project is paired with the Linux kernel to form the base of a free operating system. The software that runs the Internet, including the domain name system and most web, email, and other network servers, all run on or at least are compiled by GNU project software. While not similarly dominant on the desktop, there is little question that free software such as Firefox, again running on or at least compiled by GNU project software, has tremendously benefitted the web by spurring competition and innovation.

The GNU project has done much more than build software. It fueled the free software movement, also started by Stallman, and in turn inspired and enabled countless projects and movements. Over the long term (it will take much longer than 25 years for this to play out), it will make us rethink the contours of what is possible in the space of social cooperation and invidual autonomy, social justice and freedom.

Heady and heavy stuff, but ultimately unsurprising — consider that computers are now the driving force of change in the world today — movements concerning the production and control of software must become increasingly central.

So please join us in wishing the GNU project a happy 25th birthday by spreading a happy birthday video from comedian Stephen Fry. The video, Freedom Fry, is released under a CC Attribution-NoDerivatives license.