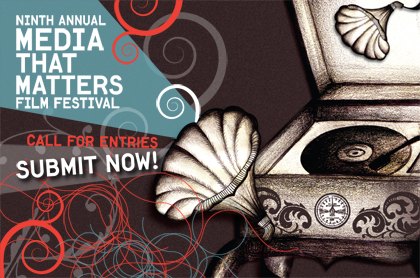 Arts Engine, a non-profit that creates social-issue documentaries, just released a call for entries for their 9th Annual Media That Matters Film Festival. The films produced for the MTMFF are short form, focus on social issues, and made mostly by young filmmakers.

Following a New York City Premiere, Awards Ceremony and industry networking event in June 2009, films submitted will take part in the Media That Matters international, multi-platform campaign with “DVD distribution, broadcasts, streaming and hundreds of screenings across the globe.” After the festival has been completed, the films will be released under a CC BY-NC-ND license. From MTMFF:

The Media That Matters Film Festival is the premier showcase for short films on the most important topics of the day. Local and global, online and in communities around the world, Media That Matters engages diverse audiences and inspires them to take action.

From gay rights to global warming, the jury-selected collection represents the work of a diverse group of independent filmmakers, many of whom are under 21. The films are equally diverse in style and content, with documentaries, music videos, animations, experimental work and everything else in between. What all the films have in common is that they spark debate and action in 12 minutes or less.

You can check out entries from previous MTMFF here, here, and here. Details on how to enter below:

Short Films: Keep it short! Under 12 minutes is good, but under 8 is even better.

Social Issues: Any and all. This year we are looking for films on Media Literacy, Human Rights, Elections & Democracy, Sustainability, Sexual Identity—but all social issues are accepted. Youth produced projects are encouraged.

Submission Fee: $25 for general submissions; $10 for students over 18 (with valid student ID); free for youth 18 and under (with valid ID).

Deadline: All submission materials must be postmarked by January 9th, 2009.

Arts Engine also sells region-free unencrypted CC licensed DVDs of all the films that can be shown in any non-commercial setting.