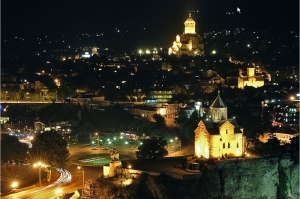 On October 23, CC Legal and Public Project Leads from Armenia, Azerbaijan, and Georgia met in Tbilisi, Georgia for a workshop to discuss the CCi license porting process in their jurisdictions. The workshop was facilitated by representatives of the Eurasia Partnership Foundation (EPF) and Nena Antic, Legal Project Lead from CC Serbia.

At the workshop, the Project Leads from the South Caucasus presented base-line assessments of their jurisdiction’s copyright legislation, a follow-up to the detailed reports they conducted in summer 2008. The results were evaluated to determine the steps required to port the core CC licenses to the legal framework in each respective jurisdiction.

Nena Antic shared her experience with the CCi license porting process in Serbia by highlighting the main obstacles, lessons learned, and CC Serbia’s tangible results so far. Nena provided in-depth explanations for the changes she introduced to adapt the CC licensing suite to Serbian law and led the workshop’s discussion on legal terminology, the NC & ND license elements, and Collective Rights Management.

Vazgen Karapetyan, EPF’s Senior Cross-Border Programs Officer and co-organizer of the workshop, remarked, “As a whole, the workshop proved highly instrumental in familiarizing the participating Affiliate Institutions with the successful experience of their Serbian counterpart. Learning about the necessary changes to port the CC licenses will definitely help the Legal Project Leads in Armenia, Azerbaijan, and Georgia develop their own first draft licenses.”

The first drafts from the three South Caucasus nations are expected to enter the public discussion on December 1, 2008.

The CC license porting commenced in the South Caucasus in May 2008 when the EPF announced a regional grant competition titled Support to the Adoption of Creative Commons Licensing Framework in the Countries of the South Caucasus. The Center for Information Law and Policy (Armenia) and the Young Lawyers Union (Azerbaijan) were identified as competition winners. On July 14, 2008, the two organizations were awarded individual grants to implement their 12-month projects in collaboration with Creative Commons International. In Georgia, a team of local legal experts representing Business Intelligence and Valuation GROUP – “BVG”, Ltd. was contracted by EPF/Georgia to oversee the CC Georgia project in partnership with the above Armenian and Azerbaijani organizations and CCi.