When Jeremy Keith, a web developer living and working in England took a photo of Vehicle Assembly Building at Cape Canaveral and posted it to Flickr under our Attribution license (which seems to be the flavor of the month around here), he had no idea it was eventually going to end up in the blockbuster feature film Iron Man. 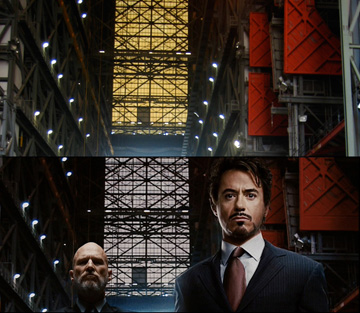 After explaining the terms of the CC license to a studio representative interested in using the photo in the film, Jeremy was told that it would costs at least $1500 to be attributed in the credits. So the studio offered the next best thing in lieu of being attributed properly: cash. But Jeremy turned the money down and just signed the license release anyway.

Besides being another example of Hollywood utilizing CC licensed material, this story offers insight into why we developed the CC+ protocol. CC+ is designed to help creators negotiate rights outside the scope of the license. For a lot of cases, this turns out to be our NonCommercial provision — that is, musicians offer their music to their fans under NC and use CC+ to point commercial users to a 3rd party rights broker (like Magnatune) that handles commercial rights negotiation on behalf of the artist. But here we can see another right being negotiated, that of attribution, which shows just how flexible CC licenses are.

Remember, when you’re the creator and owner of a copyrighted work, you have ultimate say over who does what with your work; CC licenses merely help you negotiate the thicket of what that “what” is.

Thanks go to Jeremy for writing up such an important example of CC licensed works being used in the wild.