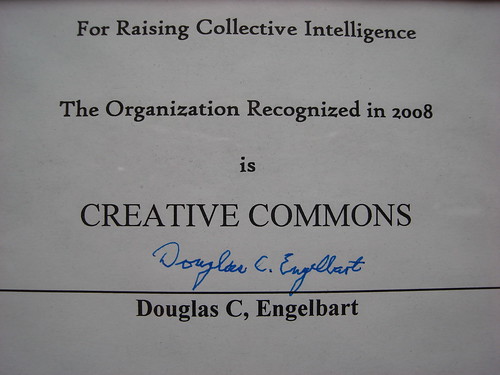 The awards were presented by renowned computer visionary and inventor Douglas Engelbart and Robert Stephenson, curator at The Tech Museum of Innovation. Said Engelbart: “Along the digital frontier, we rely on our scouts to explore the terrain and exchange information at the trading posts. Tim O’Reilly has set up the ‘Internet Pony Express’ to broadcast the possibilities of Open Source and Web 2.0 to the rest of the world. Creative Commons has begun the development of ‘trading post’ rules for us to collectively work together in developing and applying knowledge to solve complex urgent problems. On the 40th anniversary of The Demo, I am happy to recognize both for their demonstrated contributions to increasing our collective intelligence. Great stuff!

It is a great honor for Creative Commons to be recognized by visionary Doug Engelbart and alongside Tim O’Reilly (a long time supporter of CC, from the beginning; please join him).

The conference celebrated the 40th anniversary of Engelbart’s groundbreaking demo, with the broader theme of increasing collective intelligence — Engelbart’s life work — for solutions to human problems. There was a broad sense among attendees that our collective memory is too short, but the future is hopeful if we consciously build tools to help us (“bootstrap tools” in the parlance), and that mass collaboration and building the commons have critical roles to play.

Unsurprisingly, many of the conversations sparked by the conference had to do with learning. One poll of attendees found that those who had read Engelbart’s papers were far more likely to believe that education could be radically changed for the better. Tim O’Reilly blogged a conversation on one important aspect of learning — practice.

Previous post on the conference and my slides from a session on bootstrap tools.

Recall that CC’s annual fundraising campaign is nearing completion — now is the time to support our work to raise collective intelligence!