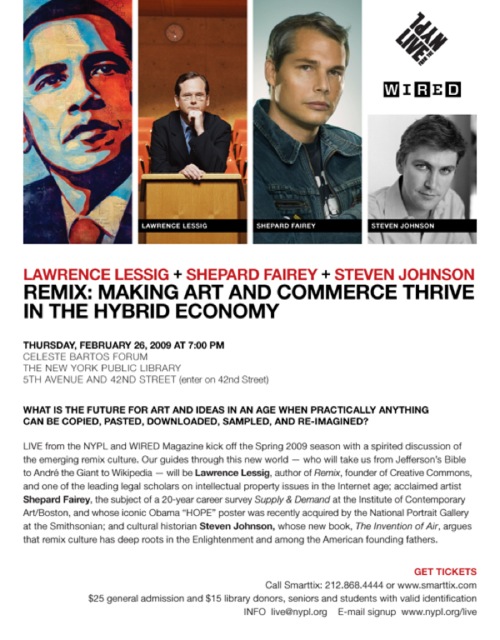 New Yorkers – next Thursday, February 26, Wired and Live from the NYPL will bring together Lawrence Lessig, Shepard Fairey, and Steven Johnson for a discussion about Lessig’s new book, Remix: Making Art and Commerce Thrive in the Hybrid Economy. The conversation will take place at 7:00pm at the Celeste Bartos Forum at the New York Public Library (5th Avenue and 42nd Street). Tickets are $25 for general admission and $15 for library donors, seniors, and students. This is Lessig’s final planned public discussion of remix and copyright issues, before he he heads to Harvard to direct the Edmond J. Safra Foundation Center for Ethics. Lessig, Fairey, and Johnson will be on hand after the talk to sign their respective books and posters.

LIVE from the NYPL and WIRED Magazine kick off the Spring 2009 season with a spirited discussion of the emerging remix culture. Our guides through this new world—who will take us from Jefferson’s Bible to André the Giant to Wikipedia—will be Lawrence Lessig, author of Remix, founder of Creative Commons, and one of the leading legal scholars on intellectual property issues in the Internet age; acclaimed street artist Shepard Fairey, whose iconic Obama “HOPE” poster was recently acquired by the National Portrait Gallery; and cultural historian Steven Johnson, whose new book, The Invention of Air, argues that remix culture has deep roots in the Enlightenment and among the American founding fathers.