I’m happy to announce the launch of this year’s Commoner Letter series – a series of letters written by prominent members of the CC community in support of our annual fundraising campaign. We want to be very clear that this campaign is about much more than raising money for CC. At the heart of it all is the crucial effort to build awareness for CC and spread the word about the importance of online sharing and participatory culture as far and wide as we possibly can.

For that reason, I am proud to say that the first Commoner Letter comes to you from Mohamed Nanabhay, the Head of Online, Al Jazeera English. Mohamed and Al Jazeera have done incredible work this year helping to build the commons and spread CC’s mission on an international level. As many of you know, earlier this year Al Jazeera launched a Creative Commons repository, which houses raw footage available for anyone to share, repurpose, and remix. We’re honored to have such a fervent supporter in Al Jazeera, and I hope you enjoy reading Mohamed’s personal story of why he values Creative Commons.

If you’re interested in receiving the remaining five Commoner Letters directly to your inbox, I encourage you to subscribe today. 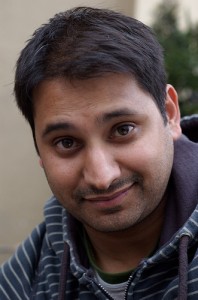 This has been a big year for the Al Jazeera Network and our use of Creative Commons. In January we launched the world’s first repository of broadcast quality video footage released under a Creative Commons 3.0 Attribution (CC BY) license. At the time we made select Al Jazeera video footage – initially, footage of the War on Gaza – available for free to be downloaded, shared, remixed, subtitled and eventually rebroadcast by users and TV stations across the world, under the condition that they attribute the material to us.

A large part of embracing free culture is accepting the fact that you are forsaking control in exchange for something greater – the empowerment of the creative community. This means that you never quite know where things will lead. When launching our repository, we had thought that it would be a key resource for anyone producing content on the war and that it would primarily be used by other news organisations and documentary filmmakers.

What we saw was both surprising and delightful. Soon after posting our first video, Wikipedia editors had extracted images to enhance the encyclopedia entries on the War on Gaza. Soon thereafter educators, filmmakers, videogame developers, aid agencies and music video producers all used and built upon our footage. We were encouraged by the warm reception with which our content was received by the free culture community.

Joichi Ito, CEO of Creative Commons said at the launch, “Video news footage is an essential part of modern journalism. Providing material under a Creative Commons license to allow commercial and amateur use is an enormous contribution to the global dialog around important events. Al Jazeera has set the example and the standard that we hope others will follow”.

Being part of a community goes beyond the launch of a single project – it involves long term commitment and shared values. Our association with Creative Commons goes back to 2007 when Lawrence Lessig, the founder of Creative Commons, delivered a keynote address at our 3rd Al Jazeera Forum in Doha, Qatar, where he challenged us to make our content freely available in order to further the values of free speech. This was a challenge that we took seriously – in addition to our Creative Commons Repository, we also make a large part of our output freely available on our YouTube channel.

After the launch of our Repository we co-hosted a workshop with Creative Commons on “Building Successful Media Projects in Open Networks,” which was moderated by Creative Common’s CEO Joichi Ito. This workshop was broadcast live throughout the Middle East as part of our 4th Al Jazeera Forum held in March 2009, which was an international gathering of nearly 200 journalists, analysts, academics, and intellectuals.

While having successfully reached out to new audiences through Creative Commons licensing, the real endorsement of what we achieved was in this note by Lawrence Lessig:

“Al Jazeera is teaching an important lesson about how free speech gets built and supported. By providing a free resource for the world, the network is encouraging wider debate, and a richer understanding”.

Working with Creative Commons has been an enriching experience. We are thankful for all the help, advice and assistance that we received along the way from Lawrence Lessig, Joi Ito, and the rest of the wonderful team that works to spread free culture.

The unintended collaboration that arose as a result of our video repository, and its positive reception worldwide, would not have been possible without the help of Creative Commons licensing. We support this effort because we have witnessed, and continue to witness, the benefits of contributing to and strengthening the digital commons. In whatever capacity you are able, I hope you will also support CC by contributing to this organization and by adding to the commons. I urge you to go forth and license!