Carl Malamud is a technologist, author and public domain advocate, as well as a great friend and outstanding supporter of Creative Commons. Malamud founded and runs the nonprofit Public.Resource.Org, which works for the publication of public domain information from local, state, and federal government agencies. We’re honored to have such a fervent champion for the Commons writing the second letter in the Commoner Letter series of this year’s fundraising campaign. 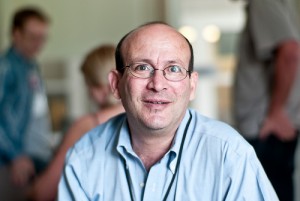 It isn’t that I don’t want to hear from you, I just want us to spend some quality time together instead of pushing paper.

Copyright laws solved one problem for a prior era, a way of marking a piece of content to indicate who the creator (or publisher) is. But, if you want to actually USE that content, under standard copyright law you or your lawyer send a letter, you get back a license agreement, you agree to terms, and you get rights to reuse the content. Every single use requires a new agreement. As they say, that doesn’t scale.

The genius of Creative Commons is a simple, universal way to let people know what they can do with your content without having to bother you each time. With the Internet, we’ve found that a whole class of uses of creative material makes sense, and with a Creative Commons license you can clearly tell people what it is they can do. Don’t care if people use your work as long as they’re not making money? Then use an Attribution-Non Commercial license from Creative Commons. Don’t care what people do as long as they give you credit? Commercial Use Allowed, Attribution Required is for you.

What is impressive about Creative Commons is that it scales. Public.Resource.Org, the non-profit I run, has published a boatload of content we get from the U.S. government: 90 million pages of documents, 1,000 videos, and a few handfuls of photographs. With the Creative Commons CC Zero and Public Domain tools, we have an easy way of telling people that they don’t have to ask permission to use this information.

So, while I’d love to hear from people, I just don’t want to have to deal with a stream of requests asking what they can do with the content we publish. With Creative Commons, that lawyerly, bureaucratic task has been taken care of, so when you do call, we can talk about something much more interesting. That’s why I’m a strong Creative Commons supporter, and that’s why I hope you’ll join me in supporting the Creative Commons 2009 Annual Campaign.