Indaba Music, an international community of musicians, music professionals, and fans exploring the creative possibilities of making music with people in different places, has been up to some pretty impressive stuff since being founded just a few years ago. We’re honored to have Daniel Zaccagnino and Matthew Siegel, the company’s co-Founders, write the fifth letter in the Commoner Letter series of this year’s fundraising campaign. We hope you will be inspired by their story of remix, collaboration, and creation in the online music world and will join them in supporting Creative Commons today. 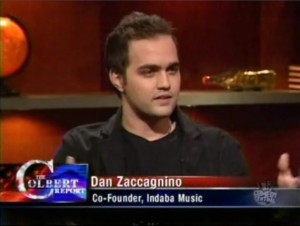 It has been an incredible year for Indaba Music – with much owed to Creative Commons and the incredible tools and culture it has fostered.

Indaba Music is a community of over 350,000 musicians from 185 countries who create music together in online recording sessions. As you might surmise from this concept, Indaba Music leverages Creative Commons licensing in a number of ways, each meaningful to our business and to the community we have cultivated. The following are just a few examples of how Creative Commons has enabled us to create some of the most interesting musical opportunities in the world:

Indaba Music Sessions are online projects in which musicians come together to combine tracks recorded in different places into single pieces of music. Every file that is uploaded to a session can be explicitly licensed under Creative Commons so musicians have control over how their music is used by those with whom they collaborate.

The Lawrence Lessig vs. Stephen Colbert Remix Challenge is an incredible example of an Indaba Music Session that leveraged Creative Commons licensing to create something extraordinary. In January of 2009 Creative Commons founder Lawrence Lessig was a guest on the Colbert Report. He discussed his just-released book “Remix.” As Larry and Stephen debated the merits of remixing, Stephen interrupted and issued a tongue-in-cheek challenge to his audience: “I will be very angry and possibly litigious if anyone out there takes this interview right here and remixes it with some great dance beat and it starts showing up in clubs across America.”

Of course, the Indaba Music community took the challenge seriously and began to remix the interview. Days later, hundreds of remixes emerged and Stephen caught wind of the Indaba Music Session. Again he issued a remix challenged to the Colbert Nation and, again, the Indaba Music community responded in force. Ultimately, we were invited to come on the show as the guest and, on February 4, 2009, had the opportunity to sit down with Stephen and defend our community and all Creative Commoners! It was great fun and a wonderful example of how everyone can benefit from being open with their content – from Colbert generating an incredible viral marketing campaign, to Indaba getting exposure, to a few select musicians who had their music played on national TV.

Indaba Music Contests are another great example of how Creative Commons has continuously broken down barriers in music. We have run several collaborative contests in which our entire community was able to remix and re-imagine such artists as The Roots, Rivers Cuomo, John Legend, and The Crystal Method with all remixes licensed under Creative Commons.

In particular, two contests have pushed the barriers of music creation and distribution. We just concluded a contest in which Indaba Music members competed to remix the entire Marcy Playground album Leaving Wonderland… In a Fit of Rage. All of the remixes are CC licensed and winners will actually get royalties on the sale of a remix CD that will hit airwaves early next year. Taking CC utilization a step further, Canadian pop-duo Carmen & Camille were the first to run a contest on Indaba Music in which submissions were licensed under CC Attribution 3.0 and remixers were allowed to sell their remixes for profit with no payments back to Carmen & Camille. Carmine & Camille wanted to create an incentive to generate the very best content that would expose their song in a new light – if one of those remixes should become a hit single it would be great for Carmen & Camille and they were happy for the remixer to benefit financially.

Our Creative Commons Clips Library is the newest CC addition to Indaba Music. Anyone can search thousands of CC licensed audio clips generated by professional musicians for Indaba Music. Moreover, the CC Mixter audio library is syndicated within our system, making all of the wonderful CC Mixter content available to over 350,000 musicians around the world.

As you can probably tell by now, we are big Creative Commons fans and CC has become an integral part of our site, our business, and our ability to continue to push musical barriers. CC licensing has opened up possibilities that never before existed, and has created an environment full of openness, collaboration, and sharing…all things that those of us in the business of music can learn from!

Support Creative Commons and help spread the word. This shouldn’t be an innovative way of doing things – it should be the standard.