Imagine a world where knowledge flows freely and can be built upon without limits. Imagine a world where culture, art and media are available to everyone, scientific content is shared by corporations and research institutions, and shared intelligence augments human rights efforts across borders. 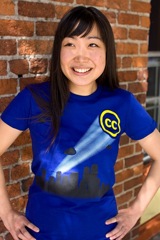 CC Superhero T-shirt, yours for a donation of $75 or more!

A legion of Creative Commons (CC) Superheroes is already at work, using our amazing tools to save people from failed sharing all over the planet. GlaxoSmithKline, a major pharmaceutical company, recently released its entire malarial data set using CC tools, speeding the urgent search for new medicines to tackle the devastating disease. Online communities at Flickr, SoundCloud, and Vimeo are making creative works available for anyone in the world to use freely and legally through license adoption. Publisher Pratham Books has begun to CC license more and more of the textbooks it provides to 14 million children in India, lifting them from a future of poverty and miseducation. When the earthquake struck Haiti in January 2010, Google and Wired used CC tools to keep information widely available to relief workers, journalists, and governments worldwide.

Our challenge ahead is to join forces with this legion of CC Superheroes to fight the forces that don’t want an open web, or do not understand that sharing is a good thing. This fall, we’re recruiting a team of CC Superheroes to lead the world in the fight for creativity and innovation. We need to raise $550,000 by the end of the year to power up and support the work we’re doing. As a superhero, your role will be to donate, spread the word, and fundraise on our behalf. As an existing supporter of CC, you already believe that a sharing world is a good world. You have fueled our work and kept us going strong, and we thank you for that. It will take nothing short of a superhero’s strength to get us to where we need to go.

Join us in this fight for a free world — donate today.