The Power of Open, released last week, demonstrates the impact of Creative Commons through stories of successful use of our tools by artists, educators, scientists, and institutions of all types.

The book also features two pages sketching the socio-economic value (separately, we’re looking at this in-depth; follow these posts) and numerical adoption of CC tools. The latter especially is asked about frequently by CC staff, affiliates, and community, and by people writing about CC: “How many things are released under CC licenses?” What The Power of Open says on this follows (slightly edited for format). 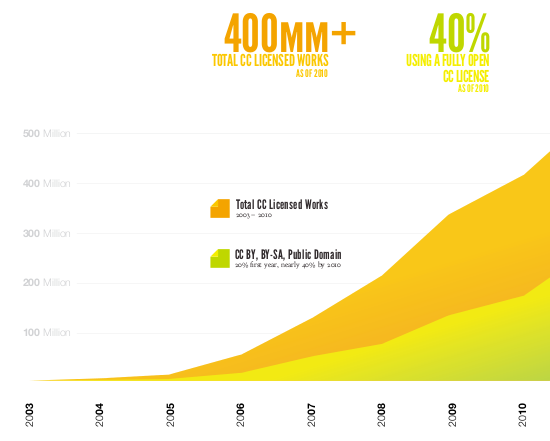 How Has Adoption of Creative Commons Grown?

Derived from these a very conservative estimate of the approximate minimum number of licensed works at the end of each year is plotted below – from under 1 million works after the first year, to over 400 million at the end of 2010.

While the chart above shows incredible growth, the absolute number of licensed works is probably far larger. Due to the conservative way we estimate, only numbers from Yahoo! Site Explorer and Flickr are actually reflected. The most significant adoption event in Creative Commons’ history, the migration of Wikipedia and other Wikimedia sites to CC BY-SA starting in June 2009, is not directly reflected in the chart. Furthermore, due to changes at Yahoo!, even relative growth is probably understated starting around May 2010.

As use of Creative Commons licenses has grown, the mix of licenses used has changed. After its first year, only about 20% of works were licensed to permit in advance both remix and commercial use – that is, considered fully free or open. After 8 years, that proportion had approximately doubled.

This change seems to indicate that once creators have experienced the power of open, they want more of it!

After “How many things are released under CC licenses?”, “Which CC license is most popular?” often follows. The answer won’t be found above, but given the trend towards more freedom, should not be a great suprise. Early in CC’s history, Attribution-NonCommercial-ShareAlike (BY-NC-SA) was the overwhelming favorite. Other licenses, especially Attribution-ShareAlike (BY-SA), slowly gained ground over the years. In July 2009, BY-SA became the most popular, and has since pulled further ahead. These changes, and more, will be charted in future posts.

For now, if you’d like to examine the raw data yourself, please see this post’s technical companion on CC Labs.

If you’re involved in a CC-enabled site, please consider adding a CC site portal with metrics like Flickr’s — invaluable as a feature for your users and as source of CC metrics.

3 thoughts on “The Power of Open: over 400 million CC-licensed works, with increasing freedom”