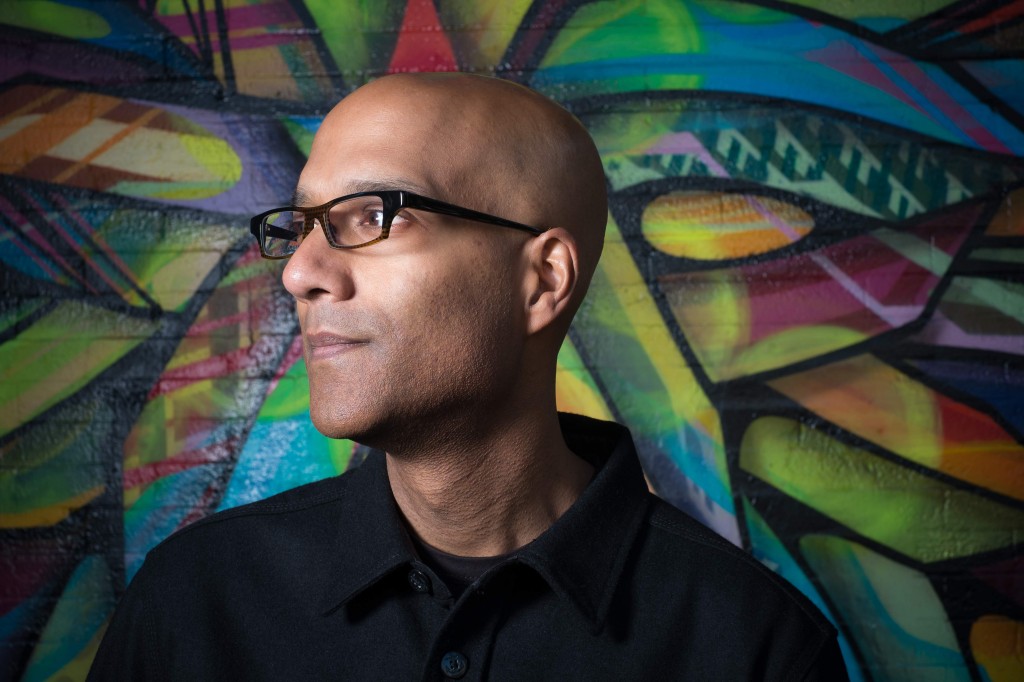 “Could you please print out your website on company letterhead and mail it to me to process your request?” This is the kind of question Anil Prasad received from music industry professionals and publicists when he began Innerviews in 1994—the internet’s first and longest-running music magazine.

The internet has evolved since then, but the concept of Innerviews remains the same as it did 20 years ago: to share and bring attention to outstanding musicians. Innerviews is Prasad’s labor of love—a site dedicated to long-form, in-depth interviews of musicians. Coming up on its 20th anniversary, Prasad has interviewed 400+ artists to date, with the site averaging 1-1.5 million visitors a year. Despite this success, Innerviews remains a not-for-profit venture, allowing Prasad to spend weeks, and sometimes months ensuring pieces are meticulously researched and edited.

Coincidentally, Prasad is also the author of the best-selling book, Innerviews: Music Without Borders, now available as an eBook under a Creative Commons BY-ND license.

Below, Prasad shares his thoughts on his recent decision to adopt Creative Commons licenses for Innerviews and his eBook, and delves deeper into how musicians can incorporate Creative Commons into their work.

Where do you hope Innerviews will be in the next 5 to 10 years? Are there any new directions for its immediate future?

The ultra-long-form content format will remain the same, but the site’s ability to adapt to the new universe of devices and screens will radically alter. The next version of the site, going live in 2014 to coincide with Innerviews‘ 20th anniversary will be totally adaptive, meaning no matter what device you view it on, it will be the same experience. Having said that, the current site works well on mobile devices as is. But it will be significantly optimized in the near term. It’s interesting to contemplate the idea of Innerviews being 25- or 30-years old. The concept of the audience extending for a ride that long is very gratifying. If you had told me that this site, started as an experiment in 1994, would turn into a life’s work and legacy, I would never have believed you. The truth is, I would like this site to live forever in one form or another. It’s a key reason for why I adopted a Creative Commons license for the entirety of the site. It means the content can be mirrored anywhere, anytime, by anyone. I’d like the site’s content to remain as snapshots of these incredible musicians’ thought processes 25, 30 or even 100 years from now. Creative Commons has created a way for that to happen. 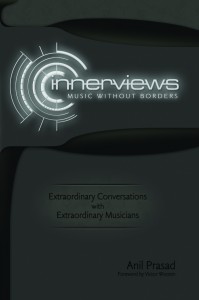 You framed the adoption of Creative Commons licenses as a “major decision.” Why did you decide to adopt CC licenses for Innerviews as well as your eBook?

It reflects a decision to totally let go of this content that I have slaved over across 25 years. It’s an acknowledgement that all of this work belongs not to me, but to the world at large. Innerviews has always been a not-for-profit endeavor, so why not formally codify it in the unique way that Creative Commons enables? Through the Creative Commons license, the content will go further than it ever has before. I had previously been rather protective of the content. I would police other sites that “ripped off” the work and get it removed, thinking Innerviews needed to be a little fortress that exclusively housed the writing. That view was misguided. Over the years, many people have asked permission to use the work in a wide variety of commercial, nonprofit, and academic environments. There are often a lot of those requests, so this decision also frees me from having to respond to each individual enquiry. Now, everyone can do whatever they want.
It’s also a major decision because I used Creative Commons to transform the for-profit Innerviews book into a not-for-profit, Creative Commons—based entity, too. As my friend, the author Robin Slick, put it, “Books have the lifespan of a cup of yogurt.” It’s true. You get maybe a year, perhaps a couple, before things totally drop off, sales wise. So, why not just release it to the world in the same way? Perhaps it’s a new model for authors and artists to consider—sell your product for a year or two to recoup or make some money via people that want to support it and want it rapidly. Once the inevitable fall-off occurs, freely release it like a pigeon into the wind.

Why did you pick a CC Attribution – No Derivatives license?

I want people to be able to distribute my writing freely, even to the point of reprinting it for commercial purposes. However, I remain protective of the integrity of the content itself. I want the features to remain completely intact. The pieces cannot be pulled apart. They represent a conversational flow that is meticulously architected. They are the equivalent of a long-form concept album in that way. You can’t just take parts out of them and still have them make sense.

Have you seen any financial or other benefits to making the switch to CC licenses for Innerviews and/or your eBook?

I just made the switch a few weeks ago [in September 2013], but already I’ve approached to have content run in magazines all over the world, as far away as The Netherlands and Russia. I’ve also seen the number of downloads of the eBook jump 1,000-fold since the decision, which has given it a totally new life, which is fantastic. At the end of the day, the goal is to get the work in the hands of as many people as possible and Creative Commons helps make that a reality.

“I’ll never have an idea of the totality of the penetration that will occur as a result of this decision, and that’s a great thing. More albums will be sold. More music will be listened to. More attendees will show up at gigs.”

How does CC bring you closer to the goal you mentioned in a 15 Questions interview: “A desire to share and bring attention to what I believe are outstanding musicians.”

Creative Commons is the exact embodiment of that idea. Creative Commons licensing means many more people will find out about the artists I cover. It enables the content to propagate all over the world, working its way into nooks and crannies of the web and far beyond. I’ll never have an idea of the totality of the penetration that will occur as a result of this decision, and that’s a great thing. More albums will be sold. More music will be listened to. More attendees will show up at gigs. At the end of the day, what Innerviews does is about helping artists. By making this content available via a Creative Commons license, those artists get an even bigger potential, global boost.

How do you feel about musicians putting their music under CC licenses?

It’s one of many valuable ways a musician can release music in a way that can reap rewards, both immediate and long-term. These days, it’s next to impossible for artists to earn a living through recordings, either because of piracy or streaming services that pay in fractions of pennies. The important thing is that putting music under a Creative Commons license is a choice. It’s up to the musician whether or not they want to do it, as opposed to their music being unceremoniously ripped off legally via streaming services if they are signed to a label or illegally via piracy.
A Creative Commons license is an invitation for the world to not only explore, but interact with music. Some Creative Commons licenses enable other musicians to take music and remix or build upon it. That means music becomes a conversation between musicians, as opposed to a fixed expression cemented in a moment in time. It’s a very exciting concept that many more musicians should examine. However, the question of monetization always looms large in these discussions. One approach is to put certain tracks, EPs or album chunks out via Creative Commons to create interest and intrigue as a roadmap towards an album that is available via more traditional means that encourage payment. There are endless permutations for how an artist could use Creative Commons to promote their work. As we have seen through services like PledgeMusic and Bandcamp, people are still willing to pay and support artists, even though they already often have full access to the music. It’s all about being creative, encouraging goodwill, and being open to the possibilities.

“The choice to invoke a Creative Commons license is a choice to get your content or music to as many people as possible, without restrictions, filters or gatekeepers. It’s about taking your work directly to the people and experiencing and enjoying the unexpected connections that get created.”

You mentioned in an interview with Radio New Zealand that if an artist is not at the point of selling, maybe that’s where Spotify and Rdio can benefit you. How does that idea tie into musicians who choose to license their music under Creative Commons?

Creative Commons offers another valuable option for musicians that are trying to crossover to the point where they can monetize their music. And unlike Spotify or Rdio, it enables them to do it entirely on their own terms, specifying how the music can be shared and made available. Jamendo, Freesound, and SoundCloud are just a handful of the many options that now exist for an emerging artist to distribute their Creative Commons-licensed music at scale, worldwide. Adopting a Creative Commons license can be a key tool in promoting work to an audience interested in reaching beyond the mainstream for new sounds.

Can you explore the idea of CC licenses as a means of spreading knowledge, and how music works with that idea?

Creative Commons is about treating the entire planet as a single global community, in which media is a shared resource that benefits the human race as a whole. This is in stark contrast to the siloed mentality and digital land grab approach the power players of the corporate media attempt to enforce on society. The choice to invoke a Creative Commons license is a choice to get your content or music to as many people as possible, without restrictions, filters or gatekeepers. It’s about taking your work directly to the people and experiencing and enjoying the unexpected connections that get created. As for music, in a way, it’s the purest manifestation of Innerviews‘ tagline: Music Without Borders.