Today is the third day of Copyright Week, and today, we’re focusing on open access. As EFF put it in the Copyright Week principles:

The results of publicly funded research should be made freely available to the public online, to be fully used by anyone, anywhere, anytime.

This is a principle that Creative Commons has always upheld. It’s crucial that the public has free online access to the research it pays for. It’s important, too, not to forget the second part of the principle: “…to be fully used by anyone.” In CC’s opinion, simply giving the public access isn’t enough. It’s impossible to enable full use without communicating the legal rights available to downstream users of those works. The definition in the seminal Budapest Open Access Initiative makes this point clear:

By “open access” … we mean its free availability on the public internet, permitting any users to read, download, copy, distribute, print, search, or link to the full texts of these articles, crawl them for indexing, pass them as data to software, or use them for any other lawful purpose, without financial, legal, or technical barriers other than those inseparable from gaining access to the internet itself.

The open license attached to open access publications has enabled innovations that would have been impossible without it. For example, Daniel Mietchen (co-winner of the Accelerating Science Award Program), developed a software tool to crawl and export multimedia files from openly licensed science articles in PubMed Central. The tool has uploaded over 13,000 files to Wikimedia Commons, where they’ve been subsequently used in more than 135 English Wikipedia articles.

In some ways, 2013 was a great year for open access. In the United States, the White House issued a groundbreaking directive requiring that most publicly funded research be made available to the public, and Congress introduced the Fair Access to Science and Technology Research Act (FASTR), a bill that would require those federal agencies with yearly external research budgets exceeding $100 million to provide the public with online access to research articles stemming from such funding within 6 months of publication in a peer-reviewed journal. And several states are considering public access policies of their own. In Europe, Neelie Kroes, Vice President of the European Commission for the Digital Agenda, helped launch a pilot to open up publicly funded research data.

But the march toward open access is long and slow. Open licensing requirements for publicly funded research should really go hand in hand with those for other publicly funded materials, including educational resources and cultural works. Creative Commons recently formed the Open Policy Network and the Institute for Open Leadership to equip advocates for open policy across disciplines.

A few months ago, we published these infographics to help make the economic case for open access to publicly funded research: 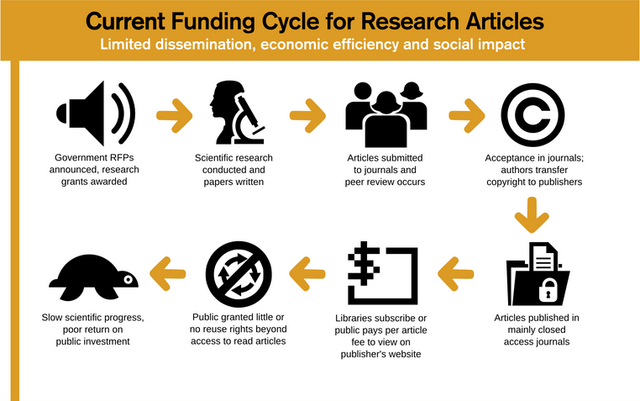 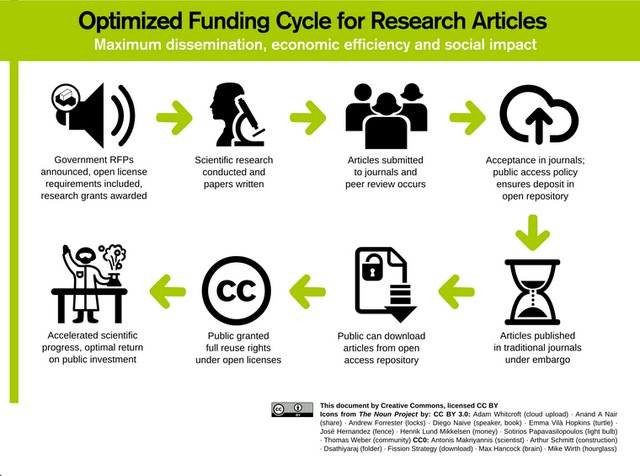 The point is obvious: the fewer restrictions are put on the public’s use of materials, the more swiftly scientific progress, the more efficiently those research grants can achieve their purpose of advancing knowledge.

2 thoughts on “Copyright Week: Read-only access is not enough”