Last June, CC began a project grant program for our Affiliate Teams around the world. Of over 70 applicants, 18 were selected to receive funds to support events or activities in their region. The chosen projects in music, education, data, culture, and technology all work towards CC’s mission to promote the understanding and adoption of open policies and practices globally.

We wanted to share how these have unfolded in the past months. Each week for the next five weeks, we will be featuring projects from different regions: Africa, Arab World, Asia-Pacific, Europe, and Latin America. This week we’re showcasing the innovative projects from Africa.

Introduction
The School of Open Kenya Initiative is a series of workshops aimed at introducing high school students to the concept and culture of ‘Open’ through the courses listed on the School of Open website. This will help them learn about and employ open tools, such as the CC licenses, as well as participate in open culture through collaboration and sharing.

Progress
Jamlab has run this project for six months now. We have worked with about two hundred high school students directly. The first batch was in Precious Blood Riruta, a girls’ high school in Kenya. The second, was Lycee Malick Sy in Thies, Senegal. The SOO Kenya program was designed to simply introduce the students to the idea of “Open” but the students gradually became more immersed and have began creating their own openly licensed content. Precious Blood Riruta students have released an Open Education Video on YouTube based on the Kenya High School literature curriculum. The students from Senegal, on the other hand, have become active editors in the Wikipedia space in Senegal. Their first collaborative effort is a Wikipedia page about their school.

What’s coming up?
For the next series of workshops, we are planning to focus our efforts in four Kenyan high schools. This will enable us to work with another two hundred students countrywide. In addition to introducing them to Open ideals, we will also encourage a system of competition in the creation of openly licensed material among the schools in order to thrust them deeper into the ecosystem that until now, has proven to change and affect their mindsets in the most gratifying way.

Creative Commons South Africa (ZA) and Obami are busy building a CC4Kids curriculum. This pilot program is aiming for innovative and dynamic course work to interest kids of all ages. Barbara Mallinson from Obami approached Kelsey Wiens, OER Lead from CC ZA last year to build the program after seeing a number of copyright violations from the kids on the network. The motivation behind the program: Wouldn’t it be cool if instead of teaching kids how to protect and lock down their stuff we instead taught them how to open and share freely? This is something kids and teenagers tend to do naturally. The course is planned to launch in March 2014 as part of the School of Open. We’re looking forward at getting a peek at what they’ve come up with! 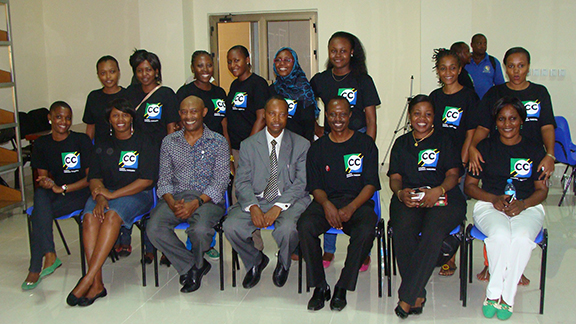 The salon focused on the importance of open copyright and open educational resources, including how Africa stood to benefit from openness in teaching, learning, and sharing as well as increased access to knowledge and quality of learning resources. Open University of Tanzania Institutional Repository also explained how the institutional repository leveraged the university and the country in adding more African content online, as African materials currently represent just 2% of online content. Other topics discussed included health and medicine, and the need to share information for better prevention and/or management for ongoing health problems like diabetes.
Alex Gakuru, Creative Commons Africa Regional Coordinator, summed up the event nicely with an overview of how the CC philosophy ties with the African community: “Creative Commons reflects our common culture and heritage of sharing.”
Click here for the full report on Tanzania’s salon.

In August 2013, CC Uganda received a grant from CC HQ to implement the project “Promoting Creative Commons Initiatives in Uganda.” The project, which is in its final stages, implemented activities to include:

The team met at Café Java on September 9th, 2013 and mapped out stakeholders to engage. The then team was composed of only 15 members i.e 9 lawyers, 2 information scientists, and 4 technology specialists (Javie Ssozi, Ruth Aine, Collins Mugume, and Micheal Niyitegeka) joined the team that day – as below: 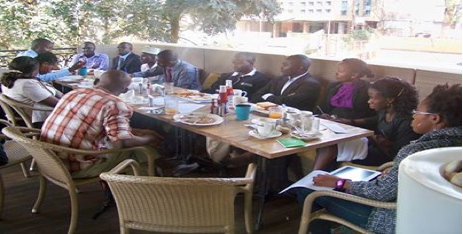 Having tech specialists and social media enthusiasts join the CC Community was added advantage in breaking the monotony of lawyers being the sole advocates for CC licensing. Soon after the meeting tweets (#CCUganda) of the licences were up and blogs running news of the same –see https://twitter.com/search?q=%23ccuganda&src=typd.
The mapping exercise was followed up with a translation sprint exercise where Affiliates were subjected to an exercise to translate CC Public domain tools/factsheets to Luganda. This too was a success as we won CC HQ support to design and print the translated factsheets for dissemination.
We have also produced IEC including factsheets, T-shirts, and stickers to raise more awareness of the licences. We have convened stakeholders and held a CC salon that has attracted more members joining the open community and committing to use and advocate for use and adoption of the licences in the Ugandan community. 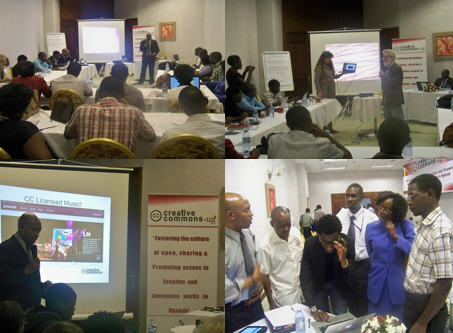 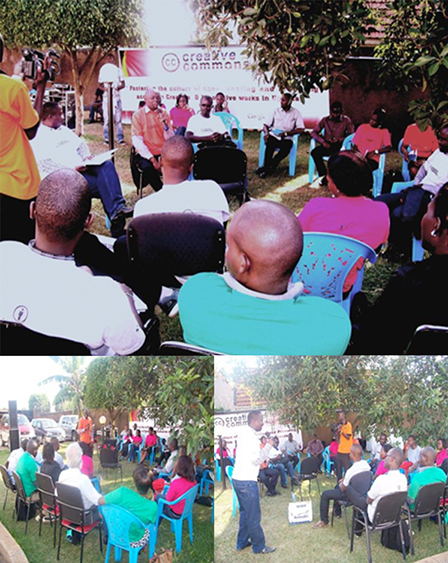 Details of pictorials can be accessed at our Facebook page here: https://www.facebook.com/pages/Creative-Commons-Uganda-Affiliates-Page/335875883192903.
We are currently working on our 2014 roadmap and official blog from which members can creatively post articles and developments of the open movement in Uganda. The page, which is in its infancy, can be accessed here http://creativecommonsug.wordpress.com/.

To Open Africa we need to activate the community. This week is the start of a month-long training program that centres around all things ‘Open’. This pilot program have been created to activate 5 Africa communities. Advocates from across Africa including Côte d’Ivoire, Ethiopia, Malawi, Uganda, and Ghana are being taken through an Open bootcamp. The intense training program for them covers all the tools and skills required for them to return to their home country and activate their communities. We are teaching them all things Creative Commons, Wikipedia, Open Street Maps, Open Educational Resources (OER), Open Data, Open Government, and the related fundraising & community building. An online version of the training program will be featured as part of the School of Open. They are all racing for the prize to be the first Kumusha Bus stop (a week-long activation in their home country on Africa Day). The Kumusha Bus is the Africanized LibreBus done in South America. The winning bid country will organize activations for a week in different locations around the country. It will be the first bus stop (of many) in Africa. 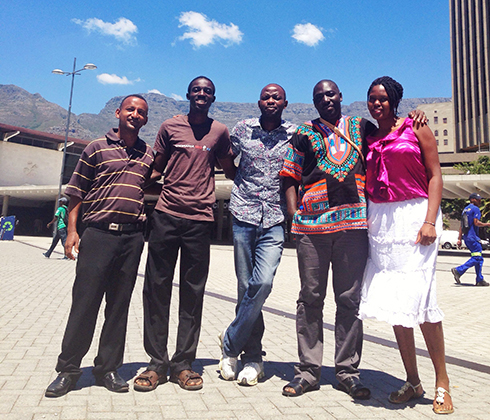