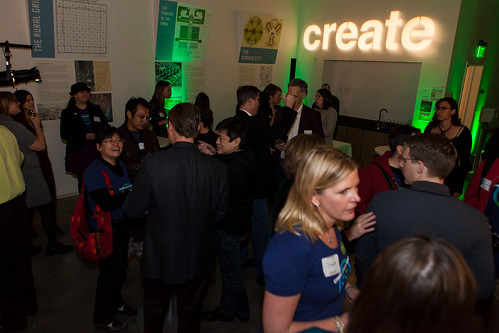 Creative Commons is thrilled to announce that we will be reviving CC salons on a quarterly basis starting March 27!

Years ago, CC ran a series of CC Salon events in the Bay Area, informal events that brought together creators of all kinds to talk about how and why they choose open in their fields. CC salons continue to occur all over the world, but on March 27, CC will host a salon on social justice and open innovation right here in San Francisco.

This informal event will feature short talks from guests in local nonprofits and the free culture community, as well as lots of interesting people to network and socialize with. It’s free and open to everyone.

Joshua Knox is co-Founder and CFO for BRUTE LABS, a non-profit out to prove that anyone can do good. BRUTEs use design and technology to create sustainable social entrepreneurship. Our small, all-volunteer team has launched 11 projects around the world and across a broad spectrum of causes; from cyclone relief in Myanmar, to clean water wells in Ghana, to a bio-diesel project with Stanford. Our open source altruism has also garnered multiple design awards from AIGA and Adobe as well as partnerships with local businesses, the city of San Jose, Google, Nike, Facebook and many more.

Niki Korth is an artist, writer, and free culture enthusiast/activist who resides in the triad of the creative arts, technological literacy, and human rights. Together with Clémence de Montgolfier, she co-founded The Big Conversation Space (TBCS), an art, research, and consulting organization based in Paris and San Francisco that acts as a participatory production platform for books, media, and games involving free speech, art, technology, politics, philosophy, and the occult. TBCS has exhibited and lectured internationally at venues including Palais Tokyo (Paris), TCB Gallery (Mellbourne, Australia), Yerba Buena Center for the Arts (San Francisco), and Human Resources (Los Angeles).

Their most recent projects include Letters for Bassel and The #FreeBassel cookbook, both dedicated to creative and participatory methods of advocacy for the release of CC community member Bassel Khartabil, who has been detained in Syria for the last two years. They also have a book coming out in summer 2014 titled I Can Do Anything Badly II, which uses conversational interviews to explore the intersections of DIY and Free Culture in the arts, the internet, sociology, and design.

Korth is also an advocate for trees and sustainable urban planning, and works in marketing and operations at DeepRoot Green Infrastructure, a San Francisco–based company that provides arboriculturally-oriented products and services for the built environment.

In the spirit of McLuhan but in the age of the Internet – she believes that we all own the message, humans as much as plant life. But the medium may have a mind of its own.

Supriya Misra is a Senior Project Manager at TeachAIDS, where she helps lead the development, maintenance, and expansion of TeachAIDS products. Founded at Stanford, and recognized as an innovation that will “change the world” by MIT Technology Review, TeachAIDS is a nonprofit social venture that creates breakthrough software to solve persistent problems in HIV prevention. Used in more than 70 countries, TeachAIDS provides the most effective HIV prevention software to educators, governments, and NGOs around the world – for free.

With a background in behavioral health research and expertise in innovative applications of new technologies in preventative care, she has previously worked at HopeLab and the Institute for Brain Potential, and co-authored a handbook on the neurobiological basis for forming positive health habits. She holds an M.A. and a B.A. with Honors in Psychology, with a concentration in Neuroscience, from Stanford University.

Rachel Weidinger is the Founder and Executive Director of Upwell, a nonprofit PR firm with one client, the ocean. At Upwell, Rachel leads the development of cutting edge big listening practices. She couples this big data approach with the resiliency-increasing tactic of campaigning across a distributed network to increase online attention to ocean issues. Because of Rachel’s vision, the ocean community knows the baseline of online conversation for its issues for the first time.

Previously, Rachel was the Senior Manager of Marketing and Communications at TechSoup Global where she provided marketing vision and leadership for TechSoup Global, and the TechSoup Global Network of partners in 36 countries. She has also worked with social enterprises including NTEN, Common Knowledge, the Black Rock Arts Foundation, SF Environment, Copia, and the Xtracycle Foundation.

Rachel has a B.Phil. in Interdisciplinary Studies from Miami University’s Western College Program, and completed the coursework for a masters in Arts Policy and Administration at Ohio State University. When she’s not working to save the ocean, she makes preserves, swims in the Bay, and gardens at her tiny home in San Francisco. She is obsessed with whale sharks.

One thought on “CC Salon in San Francisco: Free culture and social justice”