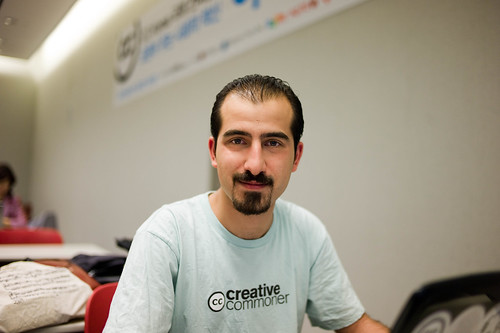 As of today, Creative Commons Syria lead Bassel Khartabil has been in prison for 1000 days. Today, we take a moment to honor Bassel and his contributions to Creative Commons. And we stand with our peers in the free software and free culture communities in demanding that he be freed.

Before Bassel was imprisoned, he worked hard to build digital literacy in Syria. Not only did he play a central role in Syria’s CC community; he was also active in Wikimedia, Openclipart, and numerous other free culture projects. As Lawrence Lessig wrote, “Mr. Khartabil isn’t a partisan, aligned with one Syrian faction against another. He represents a future, aligned against a totalitarian past.”

Bassel’s imprisonment is also a reminder that our fight is real. For those of us that work in relative safety, it can sometimes be easy to forget that a free and open internet is not a theoretical matter. Real lives are at risk.

Visit freebassel.org for more information on Bassel and how you can get involved. If you’re in San Francisco, visit Noisebridge this evening for a Free Bassel letter-writing event.