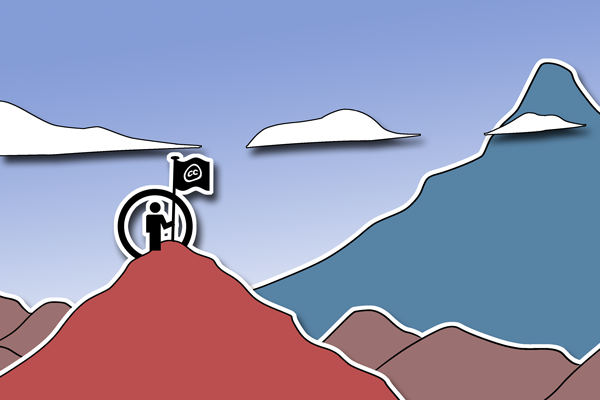 Be a voice for sharing. Support CC.

2014 was a big year in the open movement. Both the William and Flora Hewlett Foundation and the Bill & Melinda Gates Foundation approved open policies requiring grantees to publish their content under CC BY, the most open Creative Commons license. That means that for any content funded by either foundation, anyone can reuse it for any purpose, so long as they give attribution.

Being former president of the Hewlett Foundation and the current board chair at CC, I had a unique perspective on Hewlett’s open policy, and got to watch closely as it came together.

In many ways, the Hewlett Foundation’s decision was exactly what you would expect from them. After all, it was Hewlett that helped start the open education movement, and it has been Hewlett’s policy to require CC BY for educational resources for years. And yet, before the decision was finalized, it met a fair amount of uncertainty, both internally and from grantees. And the organization that was consistently there to encourage and assist the foundation was Creative Commons.

After 12 years, it’s easy to see Creative Commons’ impact on the world. 14 countries have made national commitments to open education. Here in the U.S., the Department of Labor is spending two billion dollars on open educational resources. The idea that openly licensed resources can do more good for the world than closed ones is becoming mainstream, and that’s largely thanks to CC and its supporters.

But the fight isn’t over. Governments, foundations, institutions, and even corporations need someone pushing them in the direction of sharing. And CC has stepped up to lead.

Please take a moment to think about why Creative Commons is important to you. CC is a very small nonprofit funded only by donations and grants. Your gift supports the licenses, our ongoing advocacy, and a global network in 79 countries. I know that you’re inundated with fundraising letters at this time of year, but I hope you will consider making a donation to CC.

2 thoughts on “The world Creative Commons is fighting for”