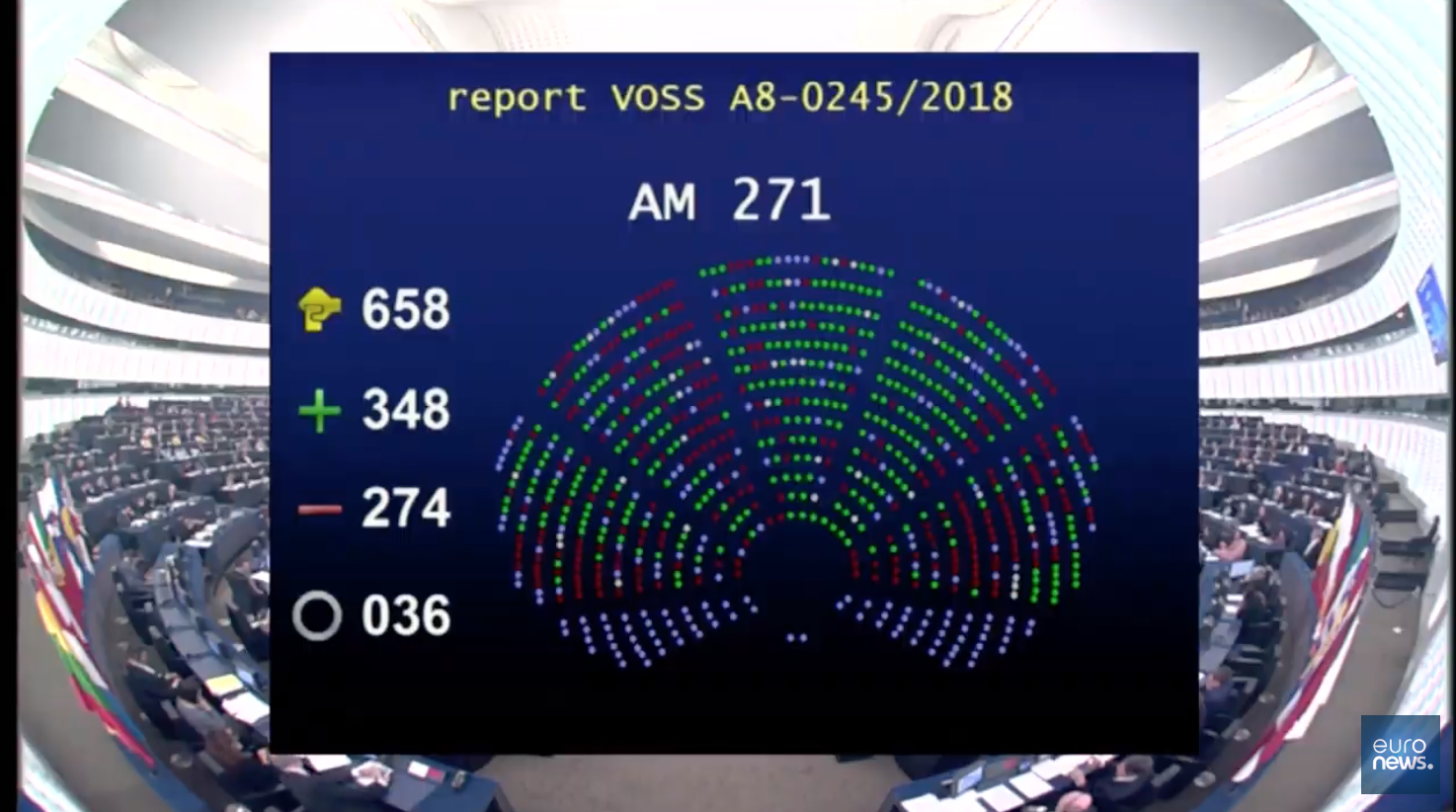 Today in Strasbourg, the European Parliament voted 348-274 (with 36 abstentions) to approve the Directive on Copyright in the Digital Single Market. It retains Article 13, the harmful provision that will require nearly all for-profit web platforms to get a license for every user upload or otherwise install content filters and censor content, lest they be held liable for infringement. Article 11 also passed, which  would force news aggregators to pay publishers for sharing snippets of their stories.

There was a potential opportunity to vote on amendments that would have removed the most problematic provisions in the draft directive, particularly Articles 13 and 11, but the preliminary vote even to consider amendments fell short by five votes, thus pushing the Parliament to move ahead and simply approve the entire package.

MEP Julia Reda called the decision “a dark day for internet freedom.” We agree. There was a massive outpouring of protest against the dangers of Article 13 to competition, creativity, and freedom of expression. This included 5+ million petition signatures, a gigantic action of emails and calls to MEPs, 170,000 people demonstrating in the in the streets, large websites and communities going dark, warnings from academics, consumer groups, startups and businesses, internet luminaries, and the UN’s Special Rapporteur on Freedom of Expression. Even so, it was not enough to convince the European legislator to change course on this complex and damaging provision that will turn the web upside down.

Despite an incredible show of public opposition to the directive, and an abundance of evidence that the proposals will favour large rights holders, damage online communities, slow or even stop innovation, and entrench established big tech players, the European legislature has decided to approve it. Regardless of this outcome, we’ll continue to work with Member States wherever we can to ensure the implementations of this directive minimize the negative impact we anticipate for the commons, and on users who want to share creativity and knowledge online.

We’re disappointed with the decision to push through Article 13 and 11, but the directive is not a total wash. There are some productive changes that will improve the situation of the commons, libraries & cultural heritage, and research sectors. For example, the directive includes a provision to ensure that digital reproductions of public domain works don’t get a separate copyright and will also be in the public domain. It includes text to improve the ability for cultural heritage institutions to preserve works and to make available copyrighted works from their collections that are no longer commercially available. And the directive slightly improves the copyright exception on text and data mining (TDM) by making mandatory an earlier optional provision that would expand the possibilities for those wishing to conduct TDM.

The final outcome of the European copyright directive reflects a disturbing path toward increasing control of the web to benefit only powerful rights holders at the expense of the rights of users and the public interest. It has been — and will continue to be — up to us all to fight for an open internet that sustains new creativity and upholds freedom of expression in the digital environment.