As more than a million Ukrainians flee for safety, the United Nations is calling the exodus Europe’s fastest-growing refugee crisis since World War II (WWII). The war in Ukraine is causing terrible human suffering and death and will impact future generations of Ukrainians. The lives of millions across the continent are now in total upheaval. In the face of the tragic devastation, the question “is this the start of Cold War II or worse yet, WWIII?” is edging into mainstream conversations.

Alongside the humanitarian crisis, the war is also causing irreversible damage to the arts, cultural, education, information, and media sectors. Creative Commons stands in solidarity with Ukraine and supports the brave and selfless individuals, working hard to preserve, safeguard, protect, and share the knowledge and cultural heritage of the Ukrainian people.

We stand beside EU Ministers of Culture and Media who expressed their support for artists, journalists, and cultural and media professionals, who, because of Russian military aggression, are now threatened in their freedoms.

We also agree with the statement of UNESCO Director-General, Audrey Azoulay, who called for the “protection of Ukrainian cultural heritage, which bears witness to the country’s rich history, and includes its seven World Heritage sites – notably located in Lviv and Kyiv; the cities of Odessa and Kharkiv, members of the UNESCO Creative Cities Network; its national archives, some of which feature in the UNESCO Memory of the World Register; and its sites commemorating the tragedy of the Holocaust.”

At Creative Commons, we believe that caring for cultural heritage is a social responsibility and that it is our collective duty to continue to protect and celebrate cultural heritage and uphold the fundamental right of freedom of information. Information and culture found in galleries, libraries, archives, and museums (GLAMs) empower people by offering them resources to engage and participate in civic life and build a future for themselves.

In 1940, during WWII, US Librarian of Congress Archibald MacLeish wrote, “Keepers of books, keepers of print and paper on the shelves, librarians are keepers also of the records of the human spirit.”

As the war on Ukraine escalates, the global library community is supporting the appeal from the Ukrainian Library Association to combat dis- and mis-information and provide accurate information to support democracy and freedom of expression. False information and media manipulation can be used to alter public opinion. Preserving and ensuring collections are available to everyone can help manage the spread of dis- and mis-information by making information, knowledge, culture and history available to all instead of warped through revisionist theories.

In the field of education, the Open Education community has highlighted the need for Ukrainian open educational resources (OER) for children and teachers as countries prepare to receive refugees. Helping children get back into school, with culturally appropriate educational resources, will be a critical part of ensuring educational opportunities continue in these trying times.

The Open Access Research community is working to support Ukrainian researchers through the website #ScienceForUkraine: a platform to support Ukrainian researchers with accommodation, research hosting, and funding. One of our friends and partners, Iryna Kuchma (Open Access Programme Manager at Electronic Information for Libraries -EIFL), lives in Ukraine and has bravely stayed behind with her parents. Her inspiring tweets are a mix of reliance, inspiration and the sadness of war. 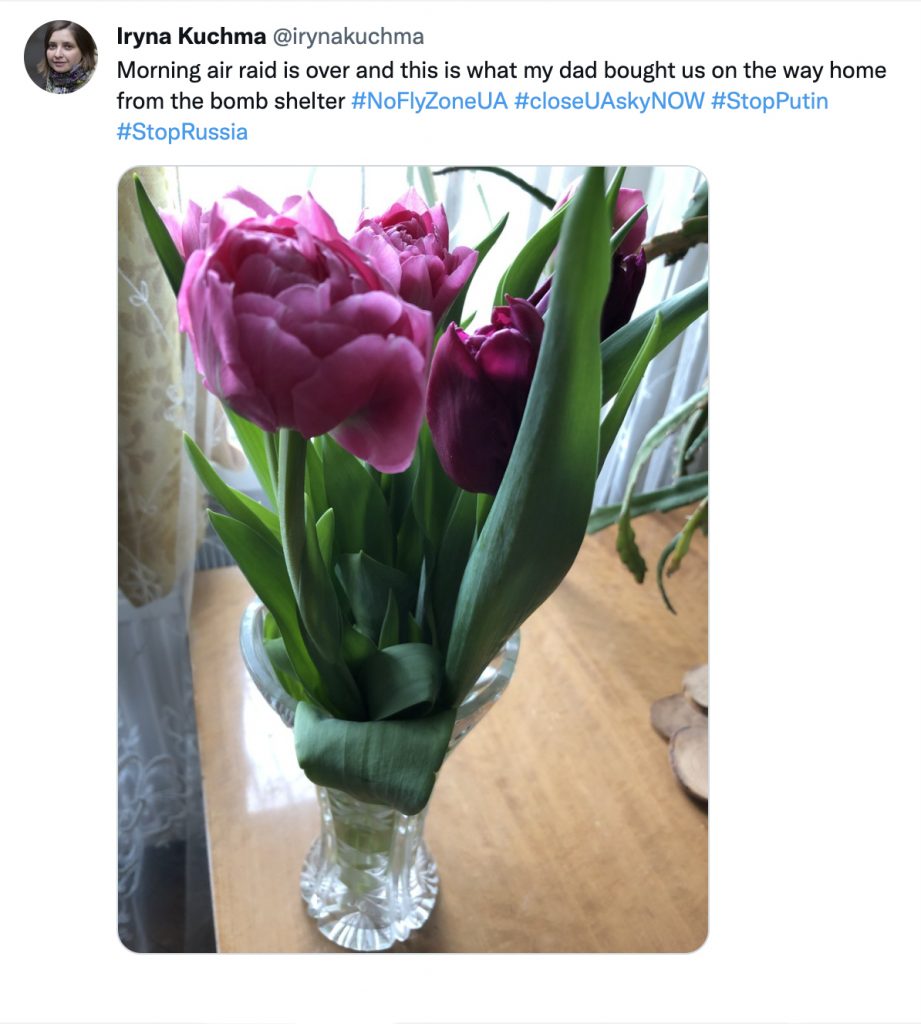 Researchers in Russia have published a statement against the war with Ukraine:

We, Russian scientists and scientific journalists, declare a strong protest against the hostilities launched by the armed forces of our country on the territory of Ukraine. This fatal step leads to huge human losses and undermines the foundations of the established system of international security. The responsibility for unleashing a new war in Europe lies entirely with Russia.

Together we unite in these somber times. Let us hope for a return to peace and respect for human dignity soon.