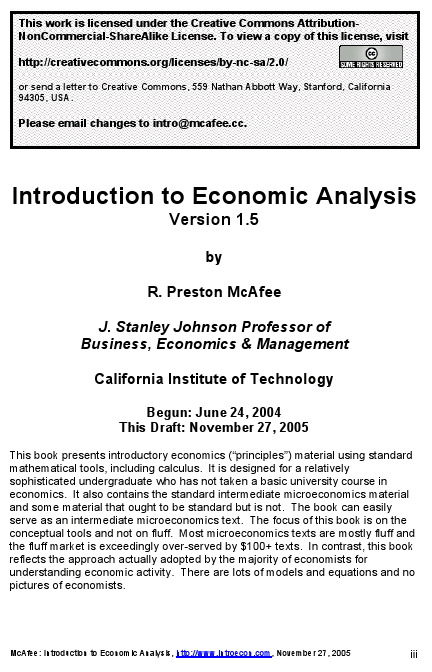 Caltech economics professor Preston McAfee appears to be mad as hell about high journal and textbook prices, and he’s doing something about it. He’s published a complete Introduction to Economic Analysis textbook under a Creative Commons license. See his page about the license and high textbook prices:

Why open source? Academics do an enormous amount of work editing journals and writing articles and now publishers have broken an implicit contract with academics, in which we gave our time and they weren’t too greedy. Sometimes articles cost $20 to download, and principles books regularly sell for over $100. They issue new editions frequently to kill off the used book market, and the rapidity of new editions contributes to errors and bloat. Moreover, textbooks have gotten dumb and dumber as publishers seek to satisfy the student who prefers to learn nothing. Many have gotten so dumb (“simplified”) so as to be simply incorrect. And they want $100 for this schlock? Where is the attempt to show the students what economics is actually about, and how it actually works? Why aren’t we trying to teach the students more, rather than less?

In addition to including a prominent CC license notice in the textbook PDF, the license is briefly mentioned in the subject text in the context of explaining sources of monopoly, page 2517 (emphasis added):

Copyright
also confers a monopoly for a supposedly limited period of time. Thus, the
Disney Corporation owns copyrights on Mickey Mouse, copyrights which by law
should have expired, but have been granted an extension by Congress each time
they were due to expire. Copyrights create monopoly power over music as well
as cartoon characters, and Paul McCartneyTime-Warner owns the rights to the song “Happy
Birthday to You,” and receives royalties every time it is played on the radio or
other commercial venue. This book is copyrighted under terms that expressly
prohibit commercial use but permit most other uses.

Via the Freakonomics blog, which includes links to additional data from McAfee about journal prices.

Update: Thanks to a suggestion from Luis Villa hardcopies of Introduction to Economic Analysis are now available at Lulu.

Update: The current version of the textbook contains the correction noted above regarding “Happy Birthday” ownership. Thanks to Gordon Mohr for pointing out the error in a comment below.