Two weeks ago, I met David Hodge, a freshman at the University of Southern California. He has been working with USC Free Culture (part of Students for Free Culture) and the USC Association for Computing Machinery chapter to run a week-long programming competition to build software for OLPC’s XO laptop. That project is “Code for a Cause.”

He had asked me if he could borrow one of the development XO laptops Creative Commons has. I agreed, and before that day was over he snapped this photo behind his house (by him; available under by-sa 3.0): 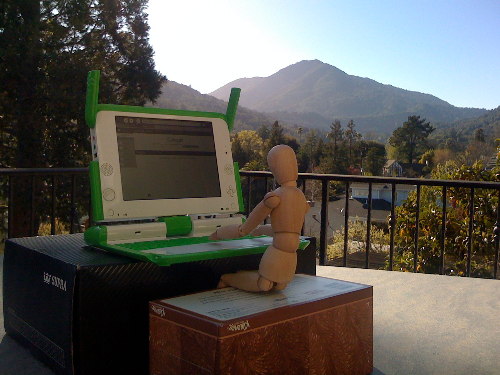 Code for a Cause explains more on its website:

The OLPC is the famed “$100 laptop” that is being sent to the world’s poorest children to give them a chance for education. In the OLPC Hackathon, teams of USC students will design open-source software that can be used on the OLPC laptops being distributed worldwide.

So if you’re in the LA area, check out their information session on April 9, and get started at their orientation on April 12!

One thought on “Code for a Cause at USC”