Yesterday we launched The Creative Commons Network as part of our annual campaign. On the surface the CC Network is simple: it acts as a premium for supporting Creative Commons and gives supporters a way to tell the world that they support CC and Free Culture. But it’s also designed as a platform for exploring digital copyright registries.  If you were at the CC Technology Summit in June (or watched the video from it) you saw that there are lots of people working in this “Copyright 2.0” space. The conversations I’ve had about registries over the past year often start with the question, “how does someone with a photograph they downloaded off the web determine who owns it?”  That’s a question we want to be able to answer and that people such as Safe Creative, Registered Commons, Image Stamper, Attributor and others are working on different approaches to. But there’s an implied question underneath: “How do I take a photo and determine who claims to owns it? And how do I know if I should trust that claim?” That question of trust is one we’re looking at with the CC Network.

Let’s start at the beginning. When you select a license, Creative Commons doesn’t store that selection; it’s up to you, the owner to publish that information. To help you with that we generate some HTML you can paste into your web page that includes the license. Including that HTML is essentially a claim of ownership; it says “I’m offering this work under a license, and I can do so because I own the necessary rights to do so.” It may say other things, too, such as how you want to be attributed for re-use, but everything else hangs off that ownership claim. To date, short of contacting the creator directly to ask for some sort of verification, you’ve had to rely on context to help decide whether you trust the claim: is the claim published on site who’s name matches the name of the author or is it on a public, anonymous host like geocities? What’s my risk profile look like? The CC Network adds another piece of information to the decision making process.

A CC Network account has two relevant pieces: a badge you can include on your page that points back to your profile and a simple work registry where you can claim works you’ve created and made available under a CC license. The badge [unsurprisingly] includes embedded metadata that associates your CC Network profile with the work it’s on.  The work registration pages also include metadata about that relationship.  So now we have two pieces of information — one from each side — making mutually reinforcing assertions, so we have reason to trust the claim.  By itself this is just a claim of ownership — it still doesn’t tell us who owns the work.  After all, why wouldn’t I just create an account for my favorite band on the CC Network, post some of their tracks on my site and claim they’re licensed? This is where supporting CC financially can help you as a creator.

When you give to CC, your name is verified by PayPal and that information is passed back to us when the transaction completes. We store that with your profile as your name and display it on the license deeds when someone clicks through from a registered work. So when you’ve licensed your work, registered it with the CC Network and added the badge, your name — verified by making a contribution — shows up on the license deed. 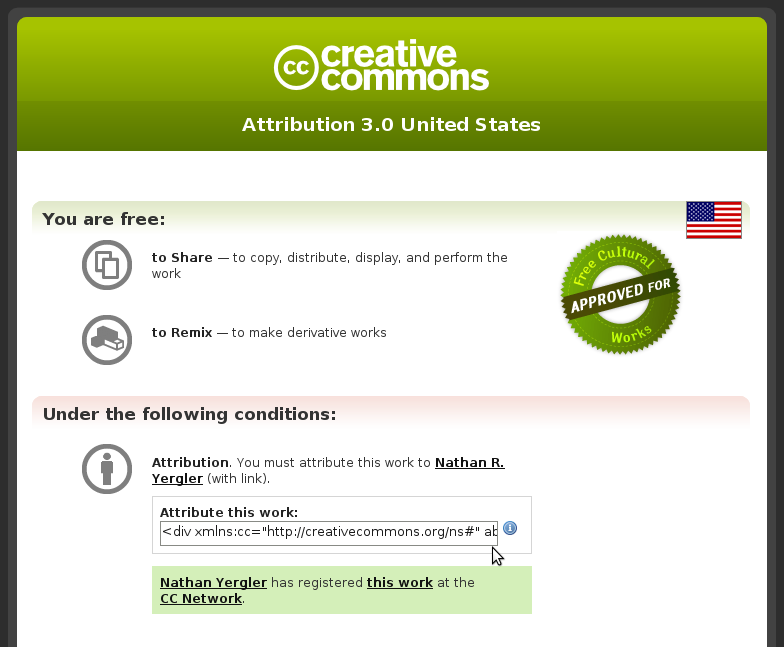 Following a link from the licensed, registered work to the deed displays network membership information.

If this were the end of the story it’d be of limited interest: another one-way, closed system for solving the problem. The most exciting part of this (for me) is that this system doesn’t actually rely on CC licenses or the CC Network at all — it’s all driven by metadata published with the work (on the network badge in this case) and with the registry (on your CC Network profile). We think the CC Network is a pretty good start but you can easily imagine other implementations that add even stronger assurances of identity: maybe one site implements web of trust, or another requires that creators show up in person with identification before becoming members. Yet another might also provide insurance backing up the claims. And applications — of which the license deeds are only one — can communicate this information to users, boosting their trust in the claim being made.

Since the beginning Creative Commons has made machine readable license information a “first-class” representation of the licenses. Because of that history and your support, we’re now in a position to continue building an infrastructure that allows creators flexibility and choice. If you haven’t already, I hope you’ll join CC now and support the commons.

One thought on “CC Network and Interoperable Copyright Registry Exploration”