Monday and Tuesday next week the Program for the Future Conference celebrates the 40th anniversary of Doug Engelbart’s famous Demo, which presaged much of modern computing, in 1968 (related in some ways, see Creative Commons 1967). From the conference website:

Engelbart dreamed of technology and tools that increased our Collective Intelligence and a stunning example of how it works. Now it’s up to us to take up the challenge. To celebrate the 40th anniversary of Engelbart’s astounding demo, the Program for the Future is bringing together some of the best minds in science, media, business and education — and we hope you will be among them — to explore the question: what’s next?

Monday the conference takes place at San Jose’s The Tech Museum of Innovation, Tuesday it moves to Stanford University. See the conference program for details and registration.

I’ll be speaking Tuesday on a panel about “Bootstrap Tools”. So what could Creative Commons have to do with bootstrapping collective intelligence? That’s not terminology we use every day, but a hint: I’ll probably title my slides The Commons as a Collective Intelligence Meta-Innovation. For further hints along those lines, sans futurist buzzwords, there’s good reading and viewing to be had in presentation slides by Science Commons’ John Wilbanks, e.g., Radical Sharing: Transforming Science? I’ll probably use some of his slides.

Final bit to whet your appetite, see the Engelbart Mural. A detail is below, featuring a clever CC BY-NC-SA license and attribution notice: 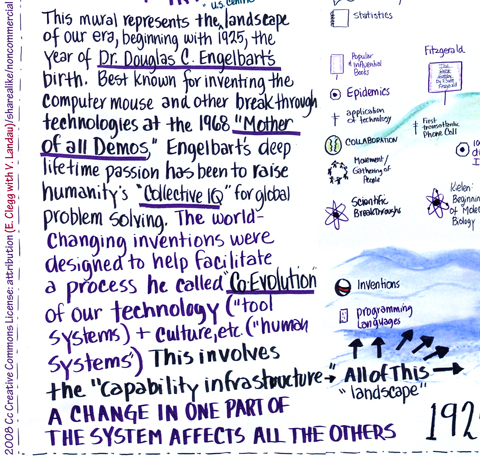