Toward the end of the video he explains CwF also means “Compete with Free” and RtB means “Return to Business” as an alternative to prosecuting fans.

Offering creative work under a CC license (as NIN has done with its last two albums) is a way to powerfully signal an intention to connect with fans and that the creator has returned to business. This doesn’t absolve a creator from the need to provide interesting reasons to buy that compete with (or perhaps rather complement) free, which NIN has done in spades.

Another good point Masnick makes at the end of the presentation is that the model works for large and small creators. A few years ago, often I’d hear people comment that tools like CC licensing were only useful for artists that weren’t well known and needed to take extreme measures to promote their works. Ironically, more recently, and especially following NIN’s successes, I see comments that open music can only work for bands that already have a rabid fan base. Obviously both can’t be true, and it turns out neither is. See some of Masnick’s previous posts on open music business models (here’s a recent one with lots of links back) for more.

If Masnick’s lecture inspires you as an artist to try the model, go for it — for additional inspiration check out Jonathan Coulton’s letter for CC’s recent campaign (because he writes eloquently about how essentially the model Masnick describes has worked for him, not because he’s asking for donations to CC, though you can make those too). If you’re inspired to help document and explain successful applications of the model, we’d love for you to help expand the CC case studies project, which is going to get much bigger this spring. 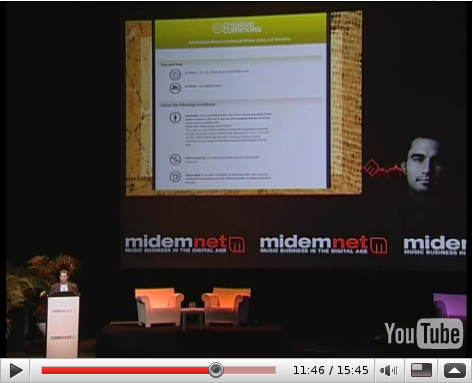