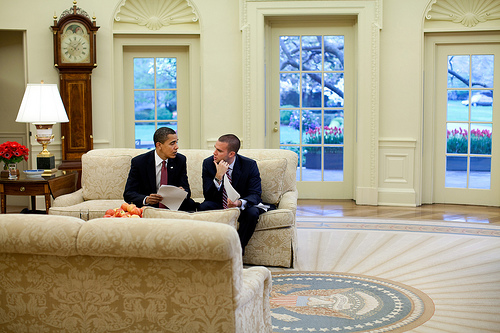 The microblogs have been a-buzz this morning about news of the launch of the official White House Flickr stream featuring photos from Obama’s first 100 days in office. While the photos are licensed under our Attribution license, one could make the very strong argument that they’re actually in the public domain and can be used without attribution (though one would have to be careful and respect the personality rights of the private citizens featured in some of the photos). The photos are likely in the public domain because they are works created by the federal government and not entitled to copyright protection. As you might recall, the Whitehouse.gov’s copyright notice indicates as much.

Why would the White House then choose Attribution for their Flickr stream? Simple, unlike communities like Wikipedia and Thingiverse, Flickr doesn’t allow their photographers to choose Public Domain as an option to release their work to the world. So the Obama team must have picked the next best option: Attribution only.

8 thoughts on “Why Did the White House Choose Attribution and not Public Domain?”