Noam Cohen’s piece in the New York Times over the weekend highlighted some of the issues surrounding photography on Wikipedia:

At a time when celebrities typically employ a team of professionals to control their images, Wikipedia is a place where chaos rules. Few high-quality photographs, particularly of celebrities, make it onto this site. This is because the site runs only pictures with the most permissive Creative Commons license, which allows anyone to use an image, for commercial purposes or not, as long as the photographer is credited.

But what Cohen somehow misses is the staggering amount of high quality professional photography (of celebrities and otherwise) that does make it on to Wikipedia. Take for example, the Davos World Economic Forum’s choice to release its entire Flickr stream, over 2,600 professional shot photos, under our Attribution-ShareAlike license. The result is a professional, high quality, and informative entry on the conference and organization filled with photos of celebrities that was entirely curated by volunteers. WEF didn’t even have to upload the photos themselves, they just made them available under the right license: 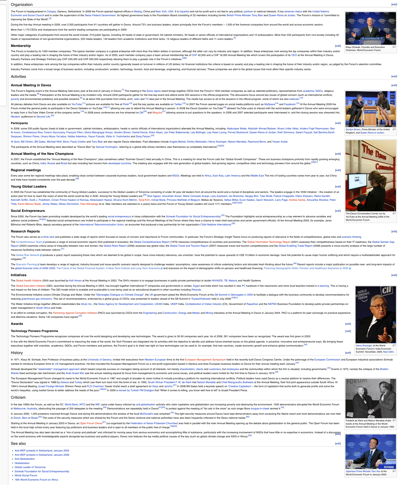 Obviously, the WEF is in the business of running a meeting and not licensing celebrity photos, but there is no doubt about the value in the works they’ve contributed to the commons; value that could have been, but wasn’t, exploited using standard all-rights-reserved copyright licenses and stock photo agencies.

In other words, the WEF realized the obvious advantages of being the provider of a certain set of free photos that would otherwise be difficult to capture professionally. As Wikipedia continues its ascent toward being a cultural necessity (if not the nth wonder of the world), these advantages will only accumulate, thus further cementing the argument for free culture.

7 thoughts on “The Reality of Professional Photography on Wikipedia”