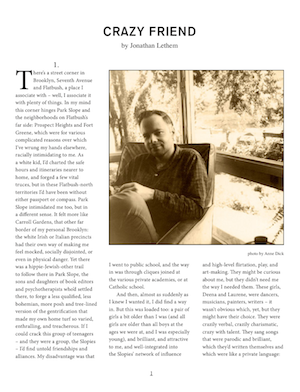 Notable Brooklyn author Jonathan Lethem (Fortress of Solitude, Motherless Brooklyn, You Don’t Love Me Yet among others) just released an essay titled “Crazy Friend” (PDF download) under a CC BY-NC-ND license. The story is a fantastic read in and of itself, but we’re doubly excited that its CC licensed.

The essay, called “Crazy Friend,” is a winding, mildly obsessive tale of how Dick’s stories guided Lethem out of childhood, into a turbulent adolescence, and at last settled him in a career as a critically-acclaimed writer. He begins by talking about his boyhood relationship with two cool older girls who didn’t get why he thought Dick’s writing was so important, and ends by introducing us to Lethem’s life as a Dick fanboy and showing us snippets of his early writing about Dick (some interesting stuff). Ultimately, Lethem says, Dick is the archetypal “crazy friend” whom we’ve all known. And whom we all love.

Lethem has a new book coming out on October 13th called Chronic City and he’ll be doing an epic reading of the entire book around NYC city book stores starting October 16th.