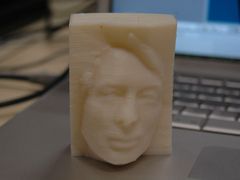 When we blogged about Radiohead releasing the data from their video for “House of Cards” last year, we weren’t really sure what fans were going to do with the 400 megabytes representing the visual data from the video. But now, thanks to Thinigiverse, we have an awesome example of what’s possible when CC licenses encourage people to share and build upon each others work.

User Serratiago has used Blender to convert the original data from the Radiohead video into a set of coordinates that can be printed into a real-life 3D sculpture of Thom Yorke’s head. Since the original data is licensed under a Creative Commons BY-NC-SA license, that means Serriago’s derivative is as well. What’s great about this story is that Serratiago didn’t need to ask Thom Yorke, Radiohead, or anyone for permission to make and distribute his work, as the Creative Commons license had already established it!