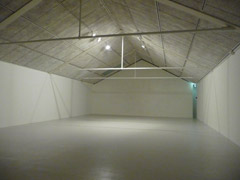 In celebration of its 20th anniversary, Oslo’s RAM Galleri is currently showing The White Cube Remix, a “sonic art” exhibition that features a collaborative soundtrack created by 68 ccMixter community members.

The project began in November 2009 when Rolf Gerstlauer, exhibit curator at RAM, approached ccMixter users Sackjo22 and Gurdonark about creating a collaborative soundtrack for the exhibit. The pair released two tracks – The White Cube (accapella) and Winter Lights (ambient) – and asked the ccMixter community to build from there. From ArtistTechMedia:

Gurdonark and SackJo22 first composed and recorded ambient samples and spoken word source material, reflecting the central themes of this exhibition — light and winter in the north, which were then contributed to the ccMixter community for remix under a Creative Commons license. In less than one month, more than 94 original compositions, from ambient music to chill beats, were created by international music makers at ccMixter specifically for the White Cube exhibit.

SackJo22 and Gurdonark compiled a playlist of these 94 original compositions onto an mp3 player that [is] installed in the RAM Galleri, thus providing more than six hours of original music as a soundtrack for the White Cube exhibition.

All of the tracks created for the project are released under a CC Attribution license, allowing them to be freely shared and reused as long as the original creators are attributed.

RAM will be hosting a symposium tomorrow (January 14th) between 7-9PM CET to discuss the project generally, how the soundtrack was created, and its relation to participatory culture in a broader sense. For those not based in Oslo, you can watch the symposium online via a dedicated video feed (browser plug-in instillation required) – the required meeting ID number is 64858:

3 thoughts on “The White Cube Remix”