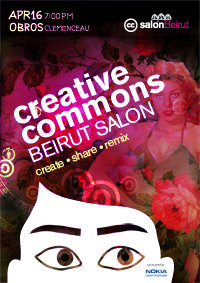 Two weeks ago the first CC Salon Beirut took place, convening a number of fantastic groups and speakers from the surrounding region. CC Arab World Media and Development Manager Donatella Della Ratta was on hand and recapped the event on her blog.

While the Salon yielded numerous exciting announcements and presentations, two were particularly inspiring. Al Akhbar, a daily newspaper published in Beirut, announced that it would begin releasing its web content under a CC Attribution-Noncommercial-No Derivative Works license. Similarly, Al Jazeera used the Salon as a platform to release footage specifically on Lebanon in to its Creative Commons repository.

Be sure to read the entire recap for more information on all the projects and presenters.