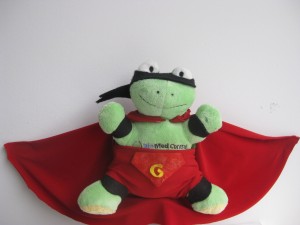 This week we are proud to announce that BioMed Central is helping us with our Superhero fundraising campaign by providing us with in-kind advertising space on their network of sites and employing the charms and gab of their feisty mascot Gulliver, the open access turtle.

BioMed Central is a UK-based, for-profit scientific publisher specializing in open access journal publication. Open access is a global movement that is opening up the world’s scholarly journal publications onto the internet, free of charge, where the primary role of copyright is to assure that credit is given where due rather than to restrict the flow of knowledge.

BioMed Central, and its sister companies Chemistry Central and PhysMath Central, publish slightly over 200 scientific journals – and not only do they publish under Creative Commons licenses, they do so under the most liberal license – CC BY. Every single article, every single journal.

By our calculations, BioMed Central is one of the most successful business stories built on CC BY. It was founded in 2000, and has grown rapidly each year which resulted in an acquisition by Springer Science+Business Media in 2008. BioMed Central is a fantastic example of how serious business can be conducted in the digital content industry without applying analog business models.

If you believe that knowledge should be accessible, then join BioMed Central in supporting CC today!