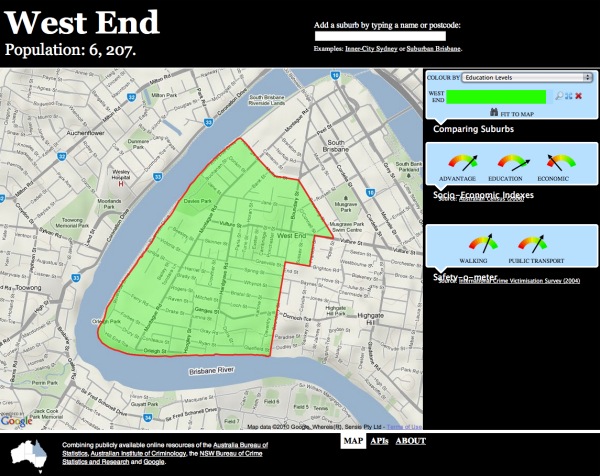 Surburban Trends is one of the winners of the MashupAustralia Contest, and uses several CC BY licensed datasets.

David Bollier writes in Viral Spiral, “Governments are coming to realize that they are one of the primary stewards of intellectual property, and that the wide dissemination of their work—statistics, research, reports, legislation, judicial decisions—can stimulate economic innovation, scientific progress, education, and cultural development” (192). The collection, creation and publishing of data has been increasingly central to government transparency and interaction with the public. Governments release datasets on census information, weather and geospatial data, food safety and product recall information, and data on foreign commerce and economic aid. In the United States there is now over 300,000 datasets made available to the public for consumption and innovative reuse via website mashups, mobile applications, and other uses.

Earlier this week open data and open government advocates gathered at the Department of Commerce in Washington, D.C. for the first International Open Government Data Conference. The purpose of the conference was “to gather the community of data owners, developers and policy makers from around the globe to share lessons learned, stimulate new ideas, and demonstrate the power of democratizing data.” The conference hosted a wide variety of speakers, including U.S. leaders like Chief Information Officer Vivek Kundra, Chief Technology Officer Aneesh Chopra, and Deputy Chief Technology Officer and Director of the Open Government Initiative Beth Noveck. There was also substantial international participation, including Sir Tim Berners-Lee, Director of the W3C and founder of the World Wide Web. Of particular interest to Creative Commons was the participation by Keitha Booth and Richard Best from New Zealand and Anne Fitzgerald and Trevor Smallwood from Australia. New Zealand and Australia have been leaders in using Creative Commons tools in sharing government information and datasets.

New Zealand presentations
Keitha Booth is the Program Leader of the Open Government Information and Data Programme in New Zealand. She talked about the New Zealand Government Open Access and Licensing Framework, or NZGOAL, for short. NZGOAL was developed as a solution to some of the problems the government encountered in sharing its information. NZGOAL recommends the Creative Commons Attribution (CC BY) license by default for works under Crown Copyright and also incorporates “no-known rights” statements for materials free of copyright. Keitha also talked about data.govt.nz, a directory of publicly-available, non-personal New Zealand government datasets. That site is licensed CC BY.

Richard Best, New Zealand Solicitor of Government Technology Services in the Department of Internal Affairs, spoke about the process behind the adoption of NZGOAL. Through consultation with various agencies, Richard discovered that policymakers and staff needed guidance on key aspects of copyright and wanted explicit procedures about how to implement the open licensing framework. He described that while the NZGOAL policies are not mandatory, cabinets and agencies must familiarize themselves with the process. Richard mentioned that while NZGOAL default license is CC BY, other Creative Commons licenses are allowed as long as agencies can justify the additional licensing conditions.

Australia presentations
Anne Fitzgerald is Professor in Law Research at the Queensland University of Technology Law School. Anne spoke about the importance of managing rights in the process of opening up government data, and described how the Australian government leverages Creative Commons licensing in its open government framework. At the outset, Anne noted a key distinction between Australian and U.S. law. While works created by the United States Government are free of copyright restrictions within the U.S., the Australian government asserts Crown Copyright over the works it creates. This applies to informational works, research reports and databases, cultural materials, and other public sector information (PSI). Professor Fitzgerald said that the advantages of using Creative Commons licenses are aligned with the government’s recognition of copyright in the materials it creates, while at the same time supporting its open access policy objectives and avoiding financial and technical locks around taxpayer-funded resources.

Trevor Smallwood, Assistant Secretary of Cyber-Security in the Australian Government Information Management Office, spoke about some of the open government and open data initiatives in Australia that leverage Creative Commons licensing. For instance, the Australian Department of Finance and Deregulation releases the budget, government briefs, and data.gov.au content under the Creative Commons Attribution (CC BY) license. Other initiatives such as the Polar Information Commons, Department of Broadband, and Australian Parliament use open licensing too.

We’ve been reporting on how governments have been demonstrating leadership in openness with Creative Commons. In addition to the New Zealand and Australia projects mentioned above, we’ve been collecting other examples on our wiki of how countries and intergovernmental organizations are adopting open licensing and public domain tools to provide increased access to government information and other public sector information. If you know of other initiatives, please add them to this wiki page. 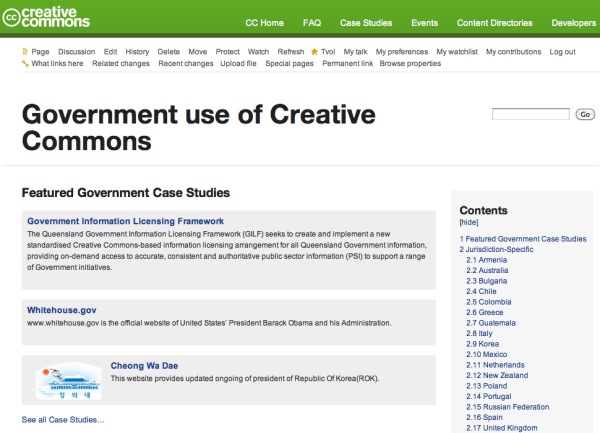