Last month at the New and Emerging Legal Infrastructures Conference I had the pleasure of participating in a panel on Interface Design for Legal Systems. See my presentation on slideshare or as a pdf.

This led to some reflection upon and discussion of Creative Commons’ “Legal User Interfaces” (LUIs). Each of the “layers” (the legalcode or license itself, the “human-readable deed” explanation of the license, and a “machine-readable” description of the license) of CC licenses serve both as user interfaces and opportunities to build upon to create further user interfaces, as are CC license buttons, the license chooser, and search. I focused on the deeds, which probably most transparently serve as LUIs, and as they are highly visual and subject to obvious critique, make for good presentation and discussion material. 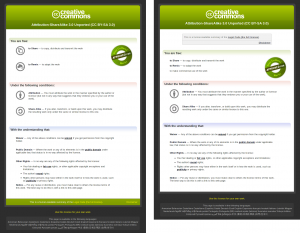 BY-SA deed before and after treatment (full size). See my presentation for images of BY-SA deeds going back to 2003.After the conference, my colleagues Diane Peters, Alex Roberts, and Chris Webber made two (or three, depending on how one counts; see this bug for the action) improvements to the deeds based on feedback we’ve gotten or frequently give that are in hindsight pretty obvious:

Initial reaction to these changes has been very positive, but we welcome criticism and suggestions for further improvement. One nice thing about these changes is that they did not require any new or changed text, thus creating no new work for translators. However, if you see anything that could be improved in your language, joining a CC translation team is a really valuable way to get involved.

Although we don’t usually post about small tweaks to the various CC layers and tools (again, all of which serve as LUIs and building blocks for further interfaces), we’re constantly on the lookout for improvements and have worked particularly on the With the understanding that: section of the deeds over the past year or so.

The ability to make such explanatory improvements as use cases, the law, and technology all change is indeed a benefit of having human readable deeds as an interface to our licenses (all of this also applies to CC0, our public domain dedication), which can only change when introducing a new version, which must be done very rarely. We’re building up to public discussion of just that, version 4.0, so now is a great time to critique, give feedback and make suggestions with respect to all aspects of CC tools.