Released a couple weeks ago, The Power of Open demonstrates the impact of Creative Commons through stories of successful use of our tools by artists, educators, scientists, and institutions of all types. The Power of Open is available for free download at http://thepowerofopen.org under CC BY. It is available in several languages, with more translated versions to come, and you can also order hard copies from Lulu. We hope that it inspires you to examine and embrace the practice of open licensing so that your contributions to the global intellectual commons can provide their greatest benefit to all people. The Power of Open was made possible by our supporters, to whom we are deeply grateful, and the numerous creators featured, initially as part of our Case Studies project. Read more. 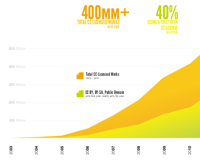 The book also features two pages sketching the socio-economic value and numerical adoption of CC tools. “How has adoption of Creative Commons grown?” is a difficult question given the decentralized nature of the web, but not as difficult as measuring economic value. Since Creative Commons’ first year, we have tracked the number of web links to Creative Commons licenses reported by search engine queries and the number of works licensed at major repositories. Derived from these a very conservative estimate of the approximate minimum number of licensed works at the end of each year is plotted at right – from under 1 million works after the first year, to over 400 million at the end of 2010. Read more.

Global Launch Events for The Power of Open

The Power of Open launched with events from around the world. The official launch occurred June 29 at The New America Foundation in Washington D.C., featuring Global Voices Online and IntraHealth, with CC CEO Cathy Casserly representing for staff. Additional launch events took place from June 16 in Tokyo, Japan, with the last event happening tomorrow, July 8, in Madrid, Spain. For the full list of events that took place in Brussels, Rio de Janeiro, London, and Paris, head on over to http://thepowerofopen.org/events. We will be reporting on outcomes from these events, so be sure to keep up-to-date by subscribing to our blog and using the tag #powerofopen on social media.