Creative Commons was launched in the aftermath of a retroactive copyright term extension in the U.S. and during a challenge to that extension, a challenge that economist Milton Friedman called a no brainer — a retroactive term extension cannot possibly incent the creation of new works, while at the same time it must rob the public domain.
Since its launch in 2002, Creative Commons has made tremendous strides in fostering the commons. In the last few years, policymakers have increasingly seen the value of making commons a default, e.g., where public information or public interest funding is involved. However, new retroactive copyright term extensions show that public policy continues to be far removed from the public interest — as is the case now with sound recording in the European Union.

The following text is by John Hendrik Weitzmann, Legal Project Lead of Creative Commons Germany and co-author of a new dossier on the EU sound recording copyright extension. 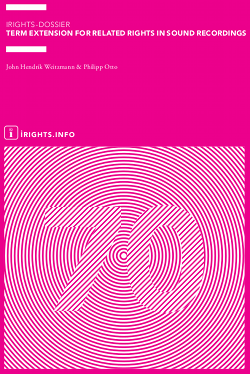 This week and next week will bring defining moments in European copyright policy. The efforts to retrospectively extend the term for related rights in sound recordings to 70 years, halted since 2009 by not finding the necessary majority in the Council of the EU, will probably be approved by the Committee of Permanent Representatives (COREPER) in Brussels tomorrow.

COREPER prepares the Council’s meeting on Sept 12th, which will without much doubt follow COREPERs preparation and pass the term extension. It will then become EU law even though both, the EU Commission that made the proposal and the EU Parliament that amended and passed it, are no longer in office.

The recent developments have largely been behind closed doors, until Denmark, Portugal and Finland indicated earlier this year that they would no longer oppose the extension. Now the proposal is being pushed to the Council again in an up-speed process.

As the most renowned copyright scholars from Cambridge to Amsterdam and Munich have pointed out again and again, such an extension will severely hurt Europe’s cultural diversity, its innovative potential and the preservation of its cultural heritage. All this in order to help four international corporations to squeeze marginal extra revenue from a fraction of the recordings of the 20th century (the 60s). The session musicians, being the group that the extension move purportedly is meant to support, are going to at best receive between 1 and 2 percent of the cake, extremely biased towards already highly successful artists like Sir Cliff Richard, a tireless campaigner for term extension. This prospect has been proven through economical and legal analysis. Academia has told the EU Commission about this in independent studies, has told the public in the Bournemouth Declaration and the Joint Academic Statement on Term Extension.

To no avail, the only ever reaction was discernible when the EU Parliament in 2009 lowered the Commission proposal’s 95 year term to 70 years and added some side provisions to counter the rights holders dominance in favour of artists. These provisions are well-meant but will not solve the distribution problem, as again was proven by academic experts. Above that, these provisions being added is ‘sold’ to the European public as being possible only if the term extension is passed. This is false. For example, as the Joint Academic Statement points out, the so called use-it-or-lose-it provision is a regular part of the German copyright code since decades ago and was introduced without any connection to a retrospective term extension.

With support by the Wikimedia Foundation, iRights.info has now compiled (blog post in German) a “Dossier on Term Extension for Related Rights in Sound Recordings”. It explains background, timeline and arguments made around the extension plans and is available in German and English.

A broad coverage of what is happening is needed all across Europe. The dossier can be sent around and built upon, it is licensed under CC BY 3.0 Germany and any re-use is highly appreciated.