The World Bank hosted an event called What the World Bank’s Open Access Policy Means for Development. Participants included Peter Suber from Harvard University, Michael Carroll from American University (Mike is on the Board of Directors at Creative Commons), and Cyril Muller and Adam Wagstaff from the World Bank. The discussion was timely given the Bank’s recently-announced Open Access Policy and Open Knowledge Repository. The World Bank’s Open Access Policy requires that all research outputs and knowledge products published by the Bank be licensed Creative Commons Attribution license (CC BY) as a default. The conversation revolved around the impact and potential for World Bank research — and open access in general — for development in countries around the world. For example, how will access and reuse of research under an open access policy create opportunities to solve large global challenges such as climate change and hunger? Read more. 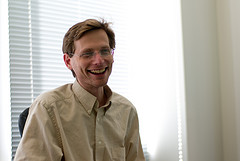 Mike Linksvayer by Joi
CC BY

A big thanks to Mike Linksvayer

Many of you know Mike Linksvayer, the first CTO and then Vice President of Creative Commons. Mike started at Creative Commons back in 2003 (almost a decade ago!), and since then has shepherded CC through a period of great expansion, providing leadership and support for efforts across various initiatives and around the world. He has also been a great help to all of us this past year, during the transition from part-time to full-time CEO. We can not begin to name everything that Mike has done, not only for Creative Commons, but for free and open culture generally, so we’ll just name a few, with the caveat that, if ever there was a jack of all trades, he is Mike Linksvayer. Since 2003, Mike has helped to… Read more.

We now welcome artists to begin working on artwork for the art competition of the Liberated Pixel Cup! Zombies, potions, spaceships, werewolves, whatever! We're looking forward to seeing what contributions you can build to match the style guide. On that note, one of the primary goals of Liberated Pixel Cup was to create a clear style that many people could collaborate on. We're happy to announce that that style guide is released, along with some base assets to build off of and a fun "walkaround" demo that shows how the tiles can fit together. Read more.

World Bank logos in banner are governed by other terms and not subject to the CC BY license.