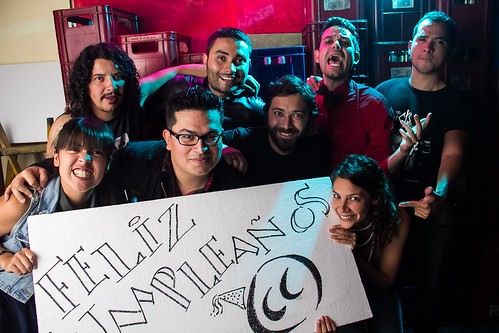 As you know, any second now we’ll be officially launching CC’s 10th birthday celebrations. But the party has already started for our global community.

Over the course of the 10 days of CC10, more than 25 events celebrating CC’s first decade will be held around the world, on every continent except Antarctica (we’re working on that one). These global events are arguably the most important part of our CC10 celebrations, as they are hosted by and bring together our community, the people who make CC happen. Most are being run by our local affiliate teams, although a few are run by other friends of CC, like the Dunedin Linux Users Group or the Auraria Library in Denver. They include all kinds of events in all kinds of places – from a teachers’ breakfast in Stockholm to a Conference and Cocktails in Nairobi. CC HQ is having it’s own party on 8 December here in San Francisco, with speakers, DJs and fun activities – but we are completely overshadowed by the dozens of parties happening in the rest of the world.

We think the first party (there are so many it’s hard to keep track) was in Costa Rica (you can see photos of it already up in our CC10 Flickr group). Between then and now we’ve had New Zealand, Venezuela and, just last night, South Africa – and there are many more in the coming week. The final event that we know of during the CC10 week will be a party at the Global Congress on IP and the Public Interest in Rio de Janeiro, on 15 December (beating Korea, Oman and Paris by its timezone). But even that will be trumped by CC Japan’s Anniversary Party in Tokyo on December 22.

So hop over to our CC10 wiki page to see if there’s a party near you.

For all those hosting a CC10 event around the world, CC’s CEO Cathy Casserly has this message.

Want to hold your own CC10 party? There’s nothing to it. Just get a few friends together and listen to some CC music, watch some CC films, or read some CC books – or better yet, share, remix and recreate them. Then add your party to our events wiki, putting “CC10” in the event type, and it will automatically be copied to our CC10 website and spread throughout our network. And for good measure, let us know by emailing press@creativecommons.org. You can download all the CC10 logos and everything else you might need for promotion from our wiki.

Correction: CC Denmark was incorrectly marked as being 13 November – it is 13 December.