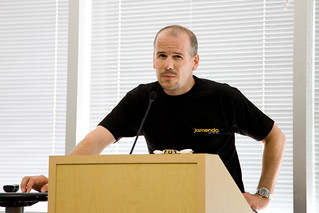 If you’re not familiar with Jamendo, it’s a community of musicians and tool for discovering new music. Unlike most other CC-enabled platforms, CC is integral to Jamendo: every songs is licensed under CC. For many songs, users can purchase commercial rights through the Jamendo PRO service.

In honor of CC10, Pierre and his team created a special #cc10 playlist of their top ten CC-licensed songs. Pierre had this to say about the playlist:

We looked back at these 8 years of existence for Jamendo; we have been blessed by the talent of so many artists that it’s hard to choose! They have made our catalog a very rich and diverse world of free music. Thanks to them, we were able to select popular songs created by artists from different parts of the world to create a playlist very diverse in terms of music genres. The most important was to choose artists that support and believe in Creative Commons, and all of these artists have promoted the concept for years.

Tell me a bit about the history of Jamendo. Was Creative Commons licensing part of your plan from the beginning?

Yes, CC licensing was in the first business model of the company. When we created Jamendo in 2004, we based our concept on free music for consumers and professional licensing, even though it took years to launch our licensing service (Jamendo PRO). Creative Commons was really the seed of Jamendo. We wanted to create a new model in the digital world where there are so many opportunities for artists to promote and share their music. We knew that some of them also have huge potential and would be able to generate revenue from their music.

Jamendo is unique among most of the media platforms we work with, in that all uploads are CC-licensed. Has that policy caused confusion among users?

Yes; we also need to evangelize and explain how CC licenses can be used. Some have been confused in the past because they were used to the “you-are-not-allowed policy” that stems from traditional copyright. The concept of CC is so much different and needs to be explained. But it’s quite easy and users understand that it is so much easier and fair.

We love hearing interesting reuse stories. Do you have any examples of tracks that got reused in surprising or amazing ways under the CC license?

We are often asked to participate in very interesting projects that are made possible by the openness of Creative Commons. We helped a Jamendo member create a compilation of CC artists in order to raise money for the victims of the tsunami in Japan. We’ve also worked with ccMixter to have our communities remix Christmas songs! Last year, we had the pleasure to see CC Spanish rock band Stormy Mondays win a contest organized by NASA and get its song “Sunrise Number 1” played in space in the Endeavour space shuttle!

What advice might you give a musician who’s unsure about sharing her work under a CC license?

There is nothing to lose and so much to gain! Music is everywhere and there is no actual way for an artist to prevent his or her music from being distributed. At the end of the day, “giving away your music for free” under a CC license creates more value in terms of fans, popularity and even money.

Where will the music industry be ten years from now? Will open licensing be the default?

It’s very likely that we see a strong growth in open licensing but I am not sure it will be the default. I like to compare open licensing with open-source software. The IT industry has seen a lot of changes since the launch of free licenses: new companies have emerged with new business models but the old ones are still there even though they’ve also had to evolve.

In 10 years, majors will still be there but they will also have learned some lessons. I am sure the place (or market share) of open licensing for music will grow with more and more artists publishing their music under CC and I hope that Jamendo will still play a big part in this new ecosystem.