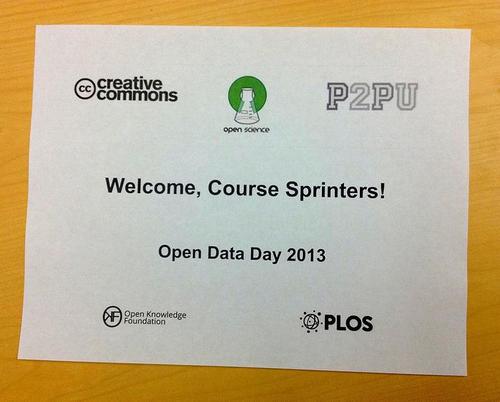 Open Data Day 2013 can be described as a success. Why? Because hundreds of people participated in more than 100 events distributed across six continents all over the world, celebrating open data and all that we can do with it. Here at CC, we planned and executed a community-supported event to build open learning resources around the topic of Open Science, done in a hackathon-style sprint event that gathered people with diverse backgrounds and experience levels. An undergraduate student and a post-doc researcher, both from Stanford. An instructional designer from Los Angeles and an associate professor from Auburn University, plus a handful more of very talented people. Oh, and a mother and high school-aged daughter duo that simply wanted to see what “open” is about. We all connected to help build an open course to teach others about Open Science. Here’s how we did it.

It’s worth mentioning that the course materials that were produced during the sprint will be openly licensed CC BY and shared so that their benefit to Open Education and Open Science are not restricted by legal boundaries. The material is being curated and will undergo a review process over the next couple weeks before being ported to the School of Open, a collaborative project by Creative Commons, P2PU, and a strong volunteer community of “open” experts and organizations. Though fitting the content to P2PU’s online course platform was in the back of our minds, time and consideration were largely placed on identifying important ideas that explain what Open Access, Open Research, and Open Data mean for Open Science, and how we can engage more “young scientists” (this is an ever-broadening term) in the ways of Open. 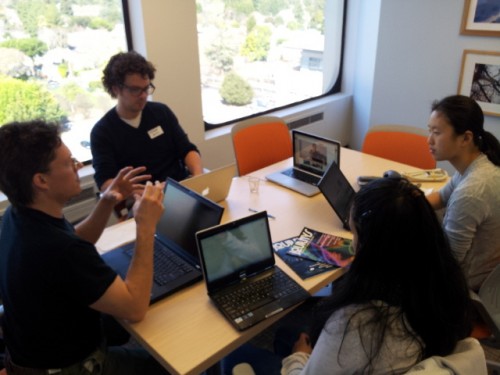 Adding a layer on top of open content itself, which is elastic in nature, our approach to this hackathon-style event focused on being very lean, the type of event that can be run by anyone, anywhere, and requiring very few resources. We created a Google Drive folder and a set of publicly-editable documents to collect openly-licensed resources, map out a tentative module/lesson plan, coordinate communications between participants, and generally provide a single place to collaborate on Open Science learning materials. Connecting with other event organizers at the OKFN and PLOS, mailing lists, Twitter hashtags, and other forms of communication were established so that there was a support network for those who were organizing events and those who were interested in participating in Open Data Day events on some level. David Eaves, Rufus Pollock, Ross Mounce, and many others were loud and clear on the Open Data Day mailing list, making sure news about each event was passed around.

Dozens of #opendataday events taking place tomorrow, all over the world. bit.ly/13b0C91 #opendata

Before the event, a registration page was created for the course sprint. We offered a handful of in-person tickets for folks to come down to our office in Mountain View, as well as a number of remote participant tickets for those who were in different geographical locations. Google Hangout “rooms” were set up on laptop computers placed in physical conference rooms at the CC HQ, allowing remote participants to work in real-time with persons on the ground. To see a more detailed description of the day’s event, see the schedule document here.

So what did we make? The sprinters involved in the project collected and organized resources that explain common aspects of Open Science. The main sections (access, methods, data) were helpful in searching for content, but there was a great deal of overlap between sections, which highlighted the relationhips between them. Beyond the collection of resources, sets of tasks were built that are meant to guide learners out beyond the course and into the communities of Open Science, interacting with the ideas, technical systems, and people who are opening up science. The Introduction to Open Science course on P2PU is still in a lightly-framed state, but the plan is to include the course in the launch of the School of Open during Open Education Week, March 11-15. If you’re interested in helping make this transition or to help build or review other courses that we call “open,” come introduce yourself in the School of Open Google Group. Or check out what else is happening on P2PU. 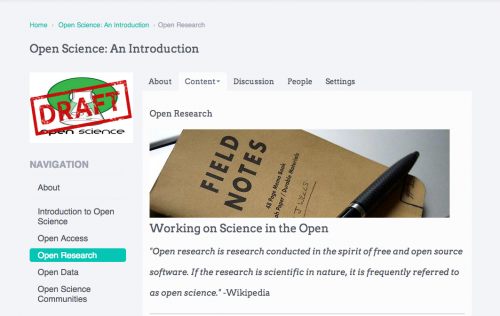 Beyond the course itself, we’re going to take a look at the sprint process we used, and work out some of the kinks. This rapid open-content creation technique is manageable, low-cost, and builds the Commons. There’s enough openly-licensed content existing on the web to produce a range of learning experiences, so now it seems that it’s a matter of developing open technology tools to the point where we can build education on the web together, easily. For more information about this and other Open Education projects being worked on by Creative Commons, see this page.

We Got Together for Open

Thanks to those who were able to participate in the Open Science course, as well as those who contributed the planning documents leading up to the event. We’ve done well.

Also: The Flickr album from the event can be found here.

2 thoughts on “Debrief: Sprinting to Build an Open Science Course”