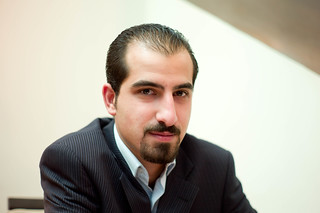 Palestinian-born Syrian software engineer Bassel Khartabil is the winner of this year’s Index on Censorship Digital Freedom Award, sponsored by Google. Khartabil is a free internet pioneer who has spent his career advancing open source technologies. On March 15, 2012, he was illegally imprisoned in Syria. His family were given no official information about why or where he was detained but have since learnt that he is being held at the security branch of Kafer Sousa, Damascus.

Index CEO Kirsty Hughes said, “Following courageous and peaceful protests in 2011, Syria descended into violence with appalling attacks on civilians across the country — and with over 60,000 people killed over the last two years. Up until his arrest last March, Bassel Khartabil bravely continued to work for a cause he passionately believes in — an open and free internet that is available to all. In a country torn apart by violence, he is a brave advocate for peaceful change.”

Bassel’s friend Dana Trometer, who is collecting the Index award on his behalf said, “Bassel deserves to be out of jail celebrating his real freedom and digital freedom. On this Mother’s day in most of the Arab World, and as a mother myself, my heart goes out to Bassel’s Mom. Bassel is a kind and gentle friend. A loving husband and son. He did not fear being targeted as he knew his love for Syria would save him from being persecuted by the authorities. Bassel is aware of this award and he would like to thank the judges and audience for trusting him with such an honour. He would also like to pay respect to all the victims of the struggle for freedom of speech, and, especially for those non-violent youths who refused to carry arms and deserve all the credit for this award.”

Another close friend of Bassel’s, Jon Phillips, stated, “Lock-up, Lock-out fails. Locking-up Bassel, only locks-out his personal freedom. By locking-up Bassel, his Syrian captors are accidentally locking-out themselves from the future. From launching Creative Commons Syria, building the Arabic Wikipedia and bringing internet leaders to Syria, he knew that his free participation in global web communities required concrete contributions locally. For these acts would make Syria a better place. One year later, Bassel is under harsh lock-down. Now, thousands of people that Bassel’s work helped, now help him by spreading the message #FREEBASSEL. This is what truly builds Syria and connects it to the global connected future. This award proves that his lock-up, is NOT a lock-out of his digital freedom.”

Bassel is known worldwide for his strong commitment to the open web, teaching others about technology, and contributing his experience freely to help the world. Bassel is the inventor of an open source software that powers the Open Clip Art Library. He is an original contributor to the Arabic Wikipedia and launched Creative Commons Syria. He is well known in online technical communities as a dedicated volunteer to major Internet projects like Creative Commons, Mozilla Firefox, Wikipedia, Open Clip Art Library, and Fabricatorz.