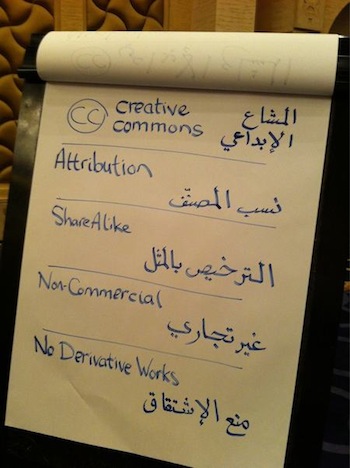 Following a multi-year process and the dedication of several Creative Commons Arab regional teams and communities, Creative Commons is very proud to announce that its 3.0 license suite is now available in Arabic. The Egypt 3.0 licenses were completed by our CC Egypt team, hosted by the Access To Knowledge initiative at the Bibliotheca Alexandrina in Alexandria. The porting effort was led by copyright expert Hala Essalmawi, with the support of Hani Sawiress.

The process of porting the 3.0 licenses endured a lengthy and eventful journey spanning the changing cultural and political climate in the Arab world. Although CC is on the cusp of publishing the 4.0 license suite, an international suite that we do not expect to port but instead translate, the Egypt 3.0 licenses are being published to recognize and celebrate the tireless effort of all of the affiliates and community members in the Arab world who cooperated to make their publication a reality after more than half a decade of effort.

Localization efforts in the Arab world began in earnest more than six years ago with affiliates in Jordan and, thereafter, in Egypt. Jordanian copyright law experts Rami Olwan and Ziad Maraqa worked early on to raise awareness of CC licenses and their potential for bolstering the existing culture of sharing found throughout the Arab world. The CC Egypt porting team leveraged those drafting efforts as a starting point for the Egypt licenses.

One of the biggest challenges of the process involved translation. Arabic is the official language of the 22 members of the Arab League, and is spoken by more than 300 million people in many different dialects. The Egyptian effort required attention to pan-regional considerations knowing that the licenses would be adopted by users outside of Egypt.

The CC Egypt team partnered with many others to complete the licences, including a group of passionate lawyers and activists from other Arabic-speaking countries. Among other important work, this group considered options for translating CC’s English legal code into modern standard Arabic while ensuring that the license names and elements (Attribution, ShareAlike, NonCommercial, and NoDerivatives) would be understood by Arabic-speakers across the region and embraced by end-users, not just lawyers. An important milestone in the localization effort came during the 2nd Arab Regional Meeting in Doha, Qatar, in October 2010. There, legal experts and community members from Egypt, Jordan, Lebanon, Qatar, Syria, and UAE, together with CC HQ, forged agreement on those terms. For those interested in more details, see the minutes (PDF) and a summary of the translation discussion in Arabic.

Worth noting is the pivotal role played by Bassel Safadi aka Khartabil, free internet pioneer and CC’s lead in Syria. Bassel has been one of the most active members of the CC Arab community, adeptly facilitating dialogue between the legal community and content creators community to produce outcomes useful to both. Bassel has been greatly missed by the Arab and global CC community since his detainment by Syrian authorities in March 2012.

We also acknowledge the dedication of the CC Egypt team and the broader Arab CC community to concluding the licenses and advancing Creative Commons adoption and community building during the many recent turbulent years in the region. The dire political and economic situation of several countries in the Arab world and the uprisings since late 2010 have brought insecurity and challenges to people’s daily lives; yet, they have managed to push forward with a wealth of user-generated, youth-driven creativity. CC communities in the Arab world have paid a tribute to this phenomenon by dedicating the past two regional meetings (2011, Tunis; 2012, Cairo) to supporting the creation of original content in Arabic, whether music or visual art or texts.

With all this in mind, the launch of the Egyptian licenses, our first set of licenses in the Arabic language, may be counted among one of the most significant recent achievements of the global CC community. Congratulations to Hala and her team at Bibliotheca Alexandrina for this masterful accomplishment during especially challenging times. Additionally, special thanks to CC Lebanon’s Mohamed Darwish and Pierre el Khoury whose multi-year contributions to the licenses proved critical, the Egyptian community and the Arab communities who commented and discussed the licenses, and CC’s coordinator for the Arab Region, Donatella della Ratta, for her dedicated efforts coordinating and supporting the many convenings necessary to complete the licenses.

Hundreds more could be thanked for their participation in this long but fruitful effort, but above all, a warm and sincere expression of gratitude to the passionate Arab people who believe in a culture of openness, transparency and sharing, and fight for it, sometimes paying with their lives. Shukran.